The Boys U.S. Soccer Development Academy, which recently completed its 10th season, ended its inaugural season of 2007-08 with 25 scouts. It enters its 11th year with a network of 125 scouts, who report 12 regional Technical Advisors, the number of which has also increased.

This week, U.S. Soccer announced the hiring of Matt Dacey, most recently Technical Director for the Oregon Youth Soccer Association, as Technical Advisor for the Pacific Northwest, and Rob Elliott as the Atlantic region TA. Elliott had served as the New York Red Bulls’ Director of Scouting and PDL (U-23s) head coach.

The hirings are part of the increase from nine TAs in 2016 to 12. Previously, the same TA covered Northern California and the Northwest. U.S. Soccer will be hiring a Northern California TA as well as one specific for Southern California, which is currently covered by Southwest TA Alex Zotinca. Elliott will cover Pennsylvania, Maryland and Virginia, enabling Cris da Silva to focus on New Jersey and New York. The addition also narrows the territories previously covered by Clint Peay (South Atlantic/Georgia) and Marcelo Neveleff (South East/Florida).

Elliott, the 2017 PDL Coach of the Year after guiding New York Red Bulls U23 to a 12-1-1 record, had also served as the Red Bulls U-15/16 DA head coach. Players who came out of the Red Bulls’ DA during Elliott’s tenure include Matt Miazga, Juan Agudelo, Matthew Olosunde, Alex Muyl and Tyler Adams.

"I was in it when the Academy started, on the coaching side, with Red Bulls,” said Elliott. “I think there has been a great deal of change in the last 10 years, from the quality of play, but also from the professionalism in every aspect: from the coaches, to the players to the administrative side, all of that. It's become a lot more professional, which I think is going to benefit the players down the road. I think the future is bright with all the initiatives that U.S. Soccer is implementing."

Dacey worked as a U.S. Soccer National Instructor in 2017 and Network Scout in 2016. Since 1998, he has had roles at Tualatin Hills United SC, Jesuit High School, Portland State University and BSC Oregon of the U.S. Soccer Development Academy.

The U.S. U-15 boys national team, coached by Dave Van Den Bergh, will compete in the 2017 Concacaf U-15 Championship Aug. 13-19 at IMG Academy in Bradenton, Florida. The USA’s 18-player roster includes George Bello, who last month helped Atlanta United win the 2017 U-15/16 Development Academy championship and who in June signed an MLS Homegrown contract.

“This is an important tournament for us, especially after the success we’ve had with the U-20s and U-17s this year,” Van Den Bergh said. “It’s going to be the first time ever that our U-15 national team is going to take part in the Concacaf U-15 Championship. We always want to win, but the inaugural one is a big one for us. It’s going to be big on our list of achievements that we want to accomplish for the duration of the tournament.

“This is a very good opportunity for these boys to showcase themselves against competition they’ll be facing for the rest of their lives, in qualifying. Hopefully, this is going to be a warm up for things to come and the future for these boys.”

As part of its Aug. 5-14 camp in Oregon, the U.S. U-17 boys national team beat South American U-17 Championship runner-up Chile, 3-0, in a friendly on Wednesday, on a goal by Josh Sargent of Scott Gallagher SC and two from Real Colorado’s Matt Hundley, according to the Chilean federation game report. They meet again on Saturday.

Hundley has been a U-17 Bradenton Residency player but wasn't part of the USA's Concacaf U-17 World Cup qualifying squad last April.

Included in the U.S. training roster is LA Galaxy academy forward Ulysses Llanez, who returned to the U.S. national team program with its U-16s in June after having attended a Mexico U-16 national team camp last December. 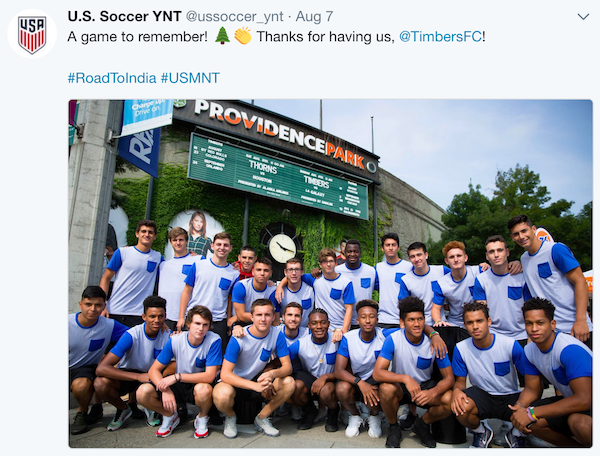 Llanez was one of four 2001 players selected to the 24-player squad, which is otherwise comprised of 2000s. The other 2001s are Taylor Booth, Bryan Reynolds and Indiana Vassilev, all of whom were part the USA’s squad in qualifying for the 2017 U-17 World Cup, which kicks off in October.

... Brady Scott, a backup goalkeeper for USA at the 2017 U-20 World Cup, signed a three-year contract with Bundesliga club FC Cologne. Scott, who hails from Petaluma, California, and played club ball for the De Anza Force, turned 18 in June. The USA's starting keeper at the U-20 World Cup, Jonathan Klinsmann has signed with Hertha Berlin. Because of injuries to two first-team keepers, Scott is set to be on the bench as a backup to Timo Horn when Cologne faces Leher TS in the German Cup on Saturday. Klinsmann is expected to be the starter on Hertha's U-23 squad.

... Jeff Carlisle reports that the dispute involving the collection of solidarity payments for youth club Crossfire Premier is closer to being heard by FIFA's Dispute Resolution Chamber. Lawyer Lance Reich, who is representing Crossfire Premier in the dispute, told Carlisle that the Yedlin case has been put on the DRC's docket, with a decision expected to be made in the next few months.