It will be one of the biggest matches in the history of the U.S. Open Cup: FC Cincinnati vs. New York Red Bulls before a sellout crowd of more than 36,000 at Nippert Stadium.

Tuesday's semifinal will also be one of the biggest sporting events of the year in Cincinnati and will have everything but a national television audience.

It took just seven hours for FC Cincinnati to sell out its public allotment of 16,000 tickets for the game -- and that after fans crashed the ticketing system.

First-year FC Cincinnati head coach Alan Koch termed the USL club "FC Disneyland" for the magical run to the semifinals with wins over a pair of MLS cubs before record crowds. The Red Bulls never won the Open Cup in 21 previous tries, though their coach, Jesse Marsch, knows about winning the tournament.

Viewing: For most fans, the only way to watch the game will be via streaming: USSoccer.com and fccincinnati.com. (ESPN, which holds the Open Cup rights, is airing its Fantasy Football Draft special; ESPN2 has Little League girls softball followed by -- you guessed it -- more Fantasy Football.) Fans in Cincinnati can also watch the game on Star64 WSTR.

March to the stadium: For those lucky FCC fans with tickets, they can take part in the march to Nippert Stadium from the Short Vine neighborhood east of the stadium, beginning at about 7 p.m.

Watch party: A watch party will also be held on Cincinnati's Fountain Square, where fans can watch the game on a big screen.

No Djiby Fall. FC Cincinnati will be without Senegalese globetrotter Djiby Fall (11 different clubs in 10 countries in a 12-year career). He scored all four FCC goals during the Open Cup but will miss the semifinals due to yellow-card accumulation.

FC Cincinnati will have goalkeeper Mitch Hildebrandt, who has not allowed a goal in four starts and stopped three penalty kicks in the shootout win over the Chicago Fire that moved FCC into the quarterfinals. 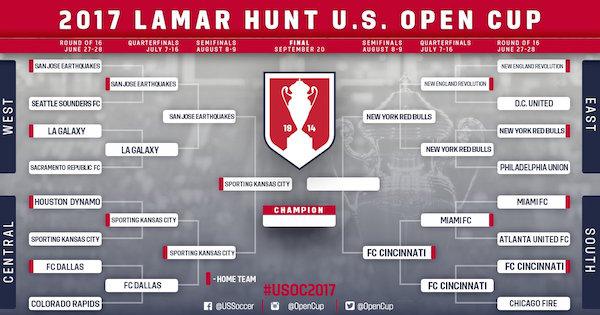 Fourteen years later. The Red Bulls have never won the Open Cup -- their lone victory in four semifinal appearances came back in 2003, the last time they made the final four -- but Marsch had plenty of success in the Open Cup as a player, winning once with D.C. United (1996) and three times with the Fire (1998, 2000, 2003).

Marsch on Tuesday: "Everyone around here is really excited for Tuesday. Really excited for a big game against a club and a team we don't really know, and it's going to be in a stadium that there's going to be more energy in that stadium than maybe we felt all year, and a team that's playing in the most important game in many of their lives. So, and to be fair, it's an important game in many of our guys' lives, so it sets up to be a great match and a fun match and one that we're going to take very seriously and we know is very important."