Some Soccer Americans might recall the name of Dani Braga, the starting goalkeeper when St. John’s University won the 1996 NCAA men’s soccer national championship. The Red Storm’s 4-1 victory over Florida International University had the unusual fact that in the FIU goal was Dani’s Syosset High School teammate, Sal Fontana. Both Dani (pronounced like “Donnie”) and Sal played in goal for different teams for the Syosset Soccer Club in the Long Island Junior Soccer League when they were growing up.

I refereed some of Dani’s and Sal’s games, as well as the Syosset men’s over-30 games that their fathers played in.

After his playing career was over, Dani became a coach, including at neighboring Jericho High School, and led the Jayhawks boys’ varsity to three consecutive state championships from 2011 to 2013. Partly so his players could continue touching the ball and in the wonderful development game of futsal, Dani started the Futsal 516 league this year. The 516 in the name derives from the area code of Nassau County, Long Island. He gave me a tour of the new facility (a field used for futsal only) in April, and I started reffing the Boys High School Division this summer. This league in its first season added 21 games to my schedule this summer so my 10,000th game wound up coming sooner than I anticipated.

My milestone game was the inaugural championship game of Futsal 516 and was played on Tuesday night, August 8 at the new facility in Jericho after I refereed the semifinals that evening too. Being playoff games with high school-age boys, all three games were intense and we had one penalty kick and two cautions in the first semi but no PKs or cards the rest of the way. In the championship match, No. 2 seed Syosset defeated No. 1 seed Great Neck North, 8-6, avenging a 13-6 loss during the regular season. Longtime ref Bob Koch was my partner on these games. 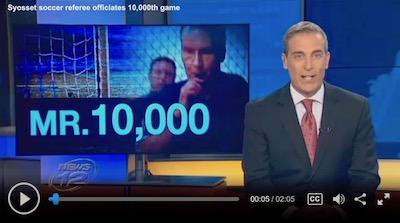 Not much time to celebrate my milestone game as the championship match concluded just before 10 p.m. and I opened up the office at my “real job” before 9 a.m. the next morning, then refereed a girl’s quarterfinal game in the Town of Hempstead Summer League that evening.

But while the 10,000 games have gone pretty smoothly during the past four decades, I’d love to say the same for my efforts to help the U.S. Soccer Foundation. I would really like to add more to my donation to support their outstanding work on field-building projects that provide youth in underserved communities with soccer programs that promote education, healthy lifestyles and leadership.

As one example, donating $25 to the Foundation can provide a child with a jersey, shin guards, socks and a soccer ball. Should you wish to contribute for my 10K of soccer games, any amount would be fine. The process is fast, easy and secure to my fundraising page. Thank you!

(Randy Vogt, the author of "Preventive Officiating," has officiated more than 10,000 games. For his milestone game, he has donated to the U.S. Soccer Foundation and he is asking Soccer Americans to consider making a tax-deductible contribution as well.)