What will become of Julian Green?

Eleven players who were raised in Germany played for the U.S. national team during the Jurgen Klinsmann era. One of the more intriguing was Julian Green, who was only 18 when he switched his allegiance from Germany to the USA while trying to break through at Bayern Munich.

Klinsmann took Green to the 2014 World Cup, one of five German products on the squad. Less than a month after his 19th birthday, Green entered the USA’s round of 16 game against Belgium at halftime of overtime and on his first touch scored the consolation goal in the USA’s 2-1 loss.

Now 22, Green has the distinction of scoring as many World Cup goals as professional league goals — one. His career has been a struggle since the World Cup.

After the World Cup, Bayern loaned him to a dysfunctional Hamburg SV, where Green played only 113 minutes in five appearances as a sub. The newspaper Die Zeit headlined an article about Green with, “The Fall of a Wunderkind.”

“I read that, and it didn’t affect me,” Green told Sport Bild. “What concerned me were the problems the club was having. But I knew then, my job is to rise again. I have by nature a healthy self-confidence.”

Green returned to Bayern for the 2015-16 season and played for its reserve team in the fourth division. Then Coach Pep Guardiola, who had praised Green around the time he moved to the U.S. national team program — “He can play wide and upfront, left and right” — wasn’t promoting Bayern youth products.

Before the 2016-17 season, new coach Carlo Ancelotti brought him on Bayern’s USA tour and Green scored a hat trick against Inter Milan. Green made the Bayern first team roster. But at at midseason, without having appeared in Bundesliga game for Bayern, he was transferred to second division VfB Stuttgart. 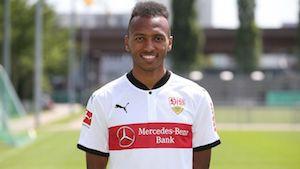 As Stuttgart won with the second division title to earn promotion to the Bundesliga 1, Green appeared in 10 games of the 17 games he was available for, starting seven, but only once going the full 90 in a total of 484 minutes of action. He did score his first pro league goal, in a 2-0 win over Fortuna Duesseldorf. (He has scored one other goal in a professional competitive game, in a 3-1 Bayern Munich German Cup win over FC Augsburg last October.)

Stuttgart starts its Bundesliga campaign at Hertha Berlin on Saturday. Last weekend, Green stayed on the bench in VfB Stuttgart’s German Cup win over fourth division Energie Cottbus on penalty kicks. In the preseason, he had the misfortune of suffering from a knee injury. And Stuttgart, of course, welcomed a good number of new players for its first division campaign — including five attackers. Missing time in preseason gave an edge to other attackers, such as Chadrac Akolo, Takuma Asano, Josip Brekalo and Anastasios Donis.

“They’re all good players,” Green said. “But it’s not my job to judge them. I focus on myself.”
When Green first joined the U.S. national team program, Bayern striker Thomas Mueller said, “the kid is for his age very robust and fast, very willing to work, technically very good. I like him.” And Bayern’s then sporting director Matthias Sammer said, “He can play any offensive position.” What impressed most were the glimpses of superb dribbling skills.

Now he is coming to the end of that 18- to 22-year-old period in which the players tend to break through  -- or reveal that they’ve plateaued. That makes this season especially crucial for Green. A season in which we’ll likely discover whether the youngest player to score a World Cup goal for the USA ever wears the U.S. jersey again.