Los Angeles Galaxy academy star Efrain Alvarez, who earlier this month signed a USL contract with Galaxy II, set up Mexico’s first goal in a 2-0 win over the USA in the Concacaf U-15 Championship final.

Alvarez, a Los Angeles native who turned 15 on June 19, was part of the USA’s U-15 national team when it went to Argentina in April of 2016. On that trip, during which Coach Dave van den Bergh’s team went undefeated, Alvarez started all three games, scored in a 2-0 win over Uruguay, and scored twice and assisted twice in a 5-1 win over Club Atletico Talleres.

However, Alvarez took part in Mexico’s U-15 national training camp in September and rejoined it for the Rimini Cup in Germany last June. In July, he scored in the U-17/18 Development Academy quarterfinal, semifinal and final as the Galaxy finished runner-up to Texans SC Houston.

Last weekend, Alvarez entered the Concacaf U-15 Championship final 10 minutes into the second half of the 70-minute game, and with his first touch delivered a free kick from midfield that soared over U.S. goalkeeper Damian Las to Jorge Garcia, who headed home.

Ronaldo Zinedin added El Tri’s second goal two minutes into stoppage time. Mexico completed the tournament without conceding a goal while scoring 15. The USA had outscored its first four foes, 15-1, before getting shut out by El Tri. 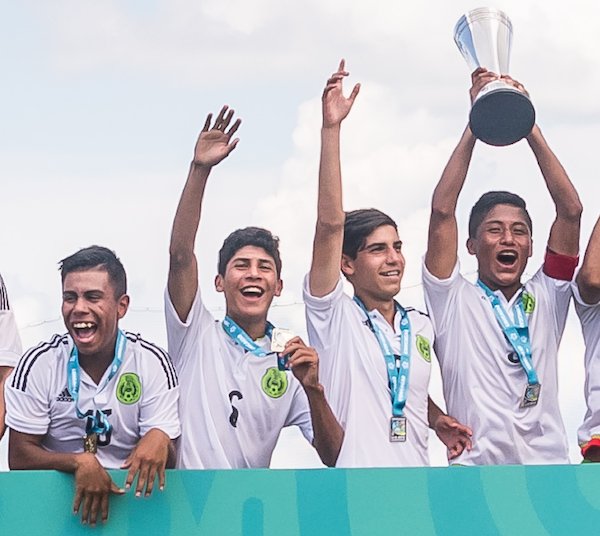 Six weeks before the 2017 U-17 World Cup in India, Coach John Hackworth’s team will compete at the Vaclav Jezek Youth Tournament in the Czech Republic, where it will in group play face Hungary (Aug. 22), Russia (Aug. 23) and Japan (Aug. 24), in a addition to a final placement game

“Following our two recent domestic training camps, this tournament will challenge our team with four tough international matches in five days,” Hackworth said. “We were able to get almost all of the players we requested released for this trip, so that will help us as we continue to prepare for the World Cup in India.”

Newcomers break into U.S. U-17 boys squad By Paul Kennedy
• In 2015, Coach Richie Williams took 19 of the 20 players he had in qualifying -- every player except McKinze Gaines -- to Chile to the Under-17 World Cup.