That’s right, an 18-year-old American stole the show when the German Bundesliga kicked off its season last weekend. Christian Pulisic’s performance in Borussia Dortmund’s 3-0 win at VfL Wolfsburg earned him "Man of the Matchday 1" honors -- and heaps of praise. 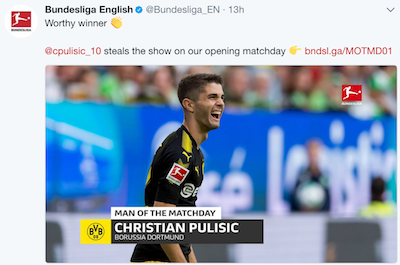 Pulisic scored and assisted in the opening day's most dominating win. The Bundesliga's official web site named him top player of Week 1 action while media paid especially close attention to Borussia Dortmund's performance because of its kickoff without French winger Ousmane Dembele. He was suspended by the club for skipping practice in the midst of a courtship with Barcelona.

BVB is asking Barcelona for a $177 million transfer fee. In the meanwhile, Pulisic started on the right wing in Dembele's place.

"That BVB could actually do without Dembele showed in the game against Wolfsburg, in which shooting star Christian Pulisic was BVB's best man," reported Focus.de.

In the 17th minute, Pulisic delivered a pinpoint cross that Gonzalo Castro hit wide. In the 22nd minute, Pulisic opened the scoring by rifling a shot between two defenders, and he set up the third with a sharp, precise pass across the goal area that Pierre-Emerick Aubameyang just had to tap in.

Pulisic earned Kicker’s highest rating for the game — a 1.5, the equivalent of an A-. The next highest rated BVB players, Mario Goetze and Pierre-Emerick Aubameyang, each earned 2s, or Bs.

A 1.5 was the highest rating Kicker handed out in the weekend's nine games, in which more than 200 players took part, with only four other players earning that grade: Bayern goalkeeper Sven Ulrich, Hertha Berlin's Matthew Leckie, who scored twice in a 2-0 win over VfB Stuttgart, Borussia Moenchengladbach's Nico Elvedi, a defender who scored in a 1-0 win over FC Cologne, and Gladbach's midfielder Ibrahima Traore.

Former BVB and Germany defender Christoph Metzelder, now a Sky TV pundit, said, “Perhaps BVB already has the new Dembele in its roster.” SportBild wrote: “Pulisic has everything that Dembele has. He is fast, tricky, and is goal-dangerous.”

Pulisic's teammate Nuri Sahin said: “Christian is a difference maker, every minute, at any time."