New Sounder Leerdam is enthused about move to MLS

Sounders right back Kelvin Leerdam is in good company.

One of the most aggressive MLS teams to use Targeted Allocation Money (TAM) to bolster its attacking options, Seattle signed the Surinamese-Dutch defender in July on a free transfer from Vitesse Arnhem and moved him straight into a position formerly occupied by DeAndre Yedlin, Tyrone Mears, team captain Brad Evans and midfielder Cristian Roldan, among others.

“It happened pretty quick,” said technical director Chris Henderson, who interviewed Leerdam in April after the teams’ performance director, Dave Tenney, had been tipped off by a colleague in the Netherlands. “Once you know the player is committed and really excited about coming, it really helps. I know his old club, Feyenoord, was interested in bringing him back as well. So we felt a little bit of pressure to get it done.”

So far, Leerdam has handled the pressure of adjusting to MLS efficiently. Heading into Cascadia Cup clashes with Vancouver (Wednesday) and Portland (Sunday), the Sounders are 4-0-1 and have conceded just one goal with Leerdam, 27, in the starting lineup. The former Dutch U-21 international played nine seasons in the Eredivisie with Feyenoord and Vitesse, and is cautiously optimistic the move will be fruitful for him and his new club. 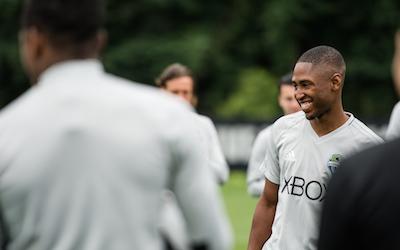 “Adapting to a new coach, a new team, and a new style, okay, that’s something I have to adapt on,” says Leerdam, who adjusted to Dutch life as a child in Utrecht after his parents moved the family from their native Suriname. “I’m still learning to know my teammates better, but every week, every training it gets a little bit better. We can only move forward from here on.”

Leerdam has passed up other opportunities to forward his career. A promising stint at Feyenoord, where he was mentored by former Dutch international centerback and current Everton manager Ronald Koeman, spurred interest from clubs much bigger than Vitesse. But he feared, at age 22, being stuck deep on a stacked roster, and opted instead for a smaller yet well-organized club.

“Only the top clubs in the Netherlands are capable of spending big money,” says Leerdam of Ajax, Feyenoord and PSV Eindhoven. “My team, Vitesse, had a lot of young players from Chelsea because Chelsea is like a mother club. Every year there are four or five players from Chelsea and that raises the level a little bit.”

One of those players is U.S. international and defender Matt Miazga, who arrived on loan in the summer of 2016. Once the former Red Bull Homegrown product had cemented a spot in the starting lineup, he played a key role in a remarkable season that propelled Vitesse to a fifth-place Eredivisie finish and the Dutch Cup, the club’s first major trophy since it was founded … 125 years ago.

“We won the Cup, we made history as a group,” said Leerdam. “He was part of it, I was part of it. In the first part of the season, he came in a little bit late, so he didn’t play and had to watch for his chance. Then after that, he never moved out. He played a big part in our team, he gave us stability, and I think that’s also why the club wanted him back so badly.” 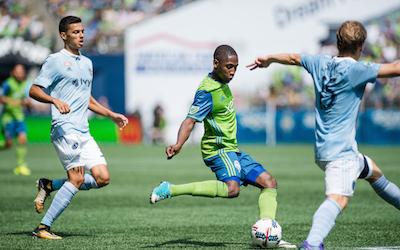 'I like the American sports mentality.' Miazga, who has gone back to Vitesse for the 2017-18 season, also fed Leerdam’s curiosity about America, though the contact with MLS came much later.

“I like American sports, I like the American sports mentality, and from what I’ve seen and what I’ve been through so far for a few weeks, I’m very happy that I made this decision,” Leerdam says. “I’ve had an NBA League Pass the last four or five years. The NBA is one of my favorite sports to watch. In Holland, they show the NFL, the NBA, ice hockey they show sometimes, so you can follow them but you have to stay awake late at night if you want to see everything.”

Travel advice from Miazga. The NBA is much more accessible on this side of the Atlantic, and Leerdam has already initiated a regimen of rest and nutrition suggested by Miazga to combat the draining effects of long flights, differing conditions, and time-zone changes.

“Matt told me about that, so maybe that was one of the reasons I was ready for that,” he says, laughing. “I know it’s going to be tough but it’s all about managing your body, that’s what he told me.”

Leerdam’s father took the family to Holland to further his own aspirations as a soccer player and by whatever methods has passed down good habits to his son. Early in the interview process, Henderson noticed in Leerdam’s responses a sharp awareness and curiosity about methods of play, positional nuances and other tactical elements, and calls him “a real student of the game.”

Learning from Ronald Koeman. Such insight stems greatly from his time at Feyenoord, which he joined in 2005 and graduated to the first team in 2008. He eventually came under the tutelage of Koeman, who introduced him to a new position and radically upgraded his abilities.

“At the academy, I always was a midfielder, a box-to-box midfielder either on the left side or the right side,” says Leerdam. “I really started focusing on this position in 2013, 2014. I always tried to be tactically smart, that’s how I grew up actually.

“I started enjoying it when Ronald Koeman started coaching me in that position, because he gave me the options I needed. He gave me the little things so I could get better and better. I think everybody can learn from him. He had a great career as a football player so when somebody like that talks to you, you only listen. That’s all you have to do.”

'A  soccer player is not a soccer robot.' Though the timing of his departure from Vitesse seems strange, coming after such a successful season, the club had long before decided not to renew his contract along with those of several other players. FIFA regulations permit a player in the last six months of a contract to negotiate with other clubs freely, so the process began of determining that next destination.

“I set the bar as high as possible for myself,” says Leerdam. “I’m not satisfied, ever, because you can never play a perfect game. It’s always good when people recognize that you are really bringing something to the team.”

One other characteristic of Koeman appreciated by Leerdam is genuine interest in a player’s background, personality, home life, etc. During the interview process with head coach Brian Schmetzer, general manager Garth Lagerwey and Henderson, Leerdam got the same feeling and feedback.

“He’s tactically very smart, but he’s also interested in who you are as a person,” says Leerdam of Koeman. “That is one of the things I learned from him. He knows how he wants the team to play but I think it’s just as important to know who you are dealing with. Where do people come from, what is the situation at home, and those things he is always interested in.

“There are things in your life that make you feel bad or better or make you play a better game. But you can also play a bad game because something happens in your life. People need to know who you are and your emotion.”

Playing on turf hasn't been an issue. Leerdam's current emotion is one of elation despite myriad differences between the leagues and the countries. Playing on turf at CenturyLink Field and in other MLS stadiums hasn’t been an issue: Leerdam says every Dutch team trains occasionally on a turf practice field and several Eredivisie stadiums use artificial surfaces as well.

The next big change will occur when his girlfriend and their two young children join him during the offseason.

“They will all come and hopefully adapt as fast as I did,” says the father of a son (19 months) and daughter (8 months). “It’s fun. I love it and I can’t imagine a life without them. We have an emotional bond now with each other and it’s only going to get stronger. They move you forward.”

“It’s not an easy league.' This theme of always moving forward, of constant progress, includes the follow-up to a first MLS Cup title with his new team in a league that he finds much better than many people give it credit for.

“It’s not an easy league because of the traveling, its very physical, it’s a skillful league, and I think it can only get better,” he says. “There are some players I don’t know them, but the first time I saw them, the vision, the touch, it’s a high level.

“I hope can I reach with this team what they reached last year. It’s not going to be easy, because maybe to win it is easier than to defend it. That’s what I’ve learned. You can win something, but to get there again is the most difficult part. I hope we will fight for it to the end to raise the Cup again.”