Barcelona is suing Neymar for "breach of contract," seeking 8.5 million euros -- $10 million -- plus an additional 10 percent payment for it what it claims was a delay in its demands being met, but the move will only exacerbate what's been a bad summer for the Catalan club.

You can criticize all you want what soccer stars make these days, what clubs are willing to pay for them and -- most important -- the role of agents in facilitating player movement, but there is no one to blame for Neymar leaving for Paris St. Germain but Barcelona.

Too bad the 222 million euros ($261 million) was a sum PSG's Qatari owners were willing to pay to trigger Neymar's release clause.

To ask for Neymar's bonus payment back is a little petty. What if he had hurt himself or all of a sudden stopping playing well? Or missed an important penalty kick? Would Barca have also asked for its money back then?

Up-front bonuses are usually no-string-attached incentives to get someone to do what you want them to do.

Barcelona's explanation that it was acting in "defense of its interests" didn't fly with Neymar's representatives:

"It is noteworthy that this news was received with surprise, since the athlete completely fulfilled the contract then in force, with the full deposit of the amounts set out in the buy-out clause freely agreed with FC Barcelona for his release."

Barcelona's announcement followed Neymar's second start for PSG, a 6-2 win over Toulouse in which the Brazilian scored two goals and assisted on two more. After the game, Neymar ripped Barca's management:

“I spent four beautiful years there and parted happy, but with them [the board], no," he said. “For me, they are not the people who should be there, for the direction of Barca. Barca deserves much better. I don’t know what’s going on there, but I see my old teammates sad, and it’s that which makes me sad because I have a lot of friends there. I hope that things will improve for Barca and that they will become a team that can rival others.”

P.S. Barcelona's day -- or next morning in Spain, to be precise -- got worse as its Twitter feed was hacked. (There's no truth to the Tweet that Angel Di Maria is heading from PSG to Barcelona.) 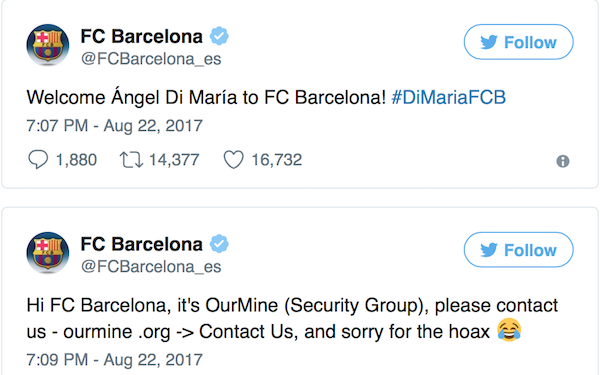