Lots on line in MLS playoff races during Rivalry Week

Separation has begun in MLS -- five points separate the sixth- and eighth-place teams in both conferences -- so Wednesday's seven games that kick off Heineken Rivalry Week will impact the playoff races.

EASTERN CONFERENCE. Atlanta United returns after two weeks off following the rescheduling of the opening of its new Mercedes-Benz Stadium. It has upward of four games in hand on the teams ahead of it above the red line and can immediately get back in the top six with a win at D.C. United. One those teams ahead of Atlanta United is Columbus, which can't afford to drop points to the struggling LA Galaxy.

After conceding a last-minute equalizer at San Jose on Saturday night that left it six points below the red line, Philadelphia faces Toronto FC, which can open a seven-point lead in the Supporters' Shield race with a win. 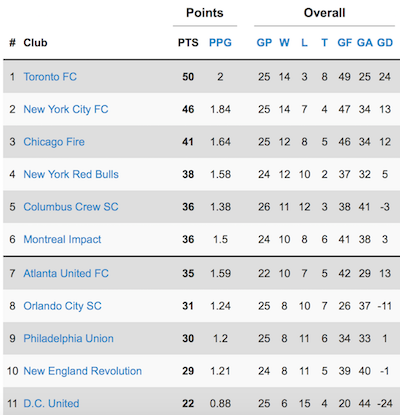 WESTERN CONFERENCE. With four interconference matches on tap, we'll know a lot about the state of the race in the Western Conference after Wednesday night.

At the top, Seattle will take over first place if it gets a result at Vancouver. The Sounders enter the game with a nine-game unbeaten streak (6-0-3), tying a club record.

Perhaps the biggest game of the evening is another derby match: FC Dallas vs. Houston. The Dynamo has the worst away record of any of the 12 MLS teams in the playoff zone, but FC Dallas has been floundering of late, having taken just one of nine points in August.

Two of the Western Conference teams on the outside looking in are San Jose and Real Salt Lake, which meet in Rio Tinto Stadium. The extra games they've played compared to the teams immediately above them complicates their paths to the postseason.

Portland hosts Colorado in Wednesday night's final match. The Timbers will be seeking back-to-back wins for the first time since June 10. Despite its so-so form of late, Portland is still in the race for the top two spots in the Western Conference, just three points off the pace. 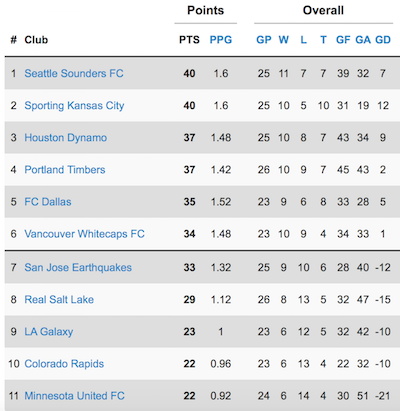