Mbappe's reasons for joining PSG are more than just monetary

Paris St. Germain is about to strike again. After the world record transfer fee of $261 million for Neymar, PSG is believed to have finally convinced Monaco to part with 18-year-old French star Kylian Mbappe.

How much will it cost? On top of a transfer fee of 145 million euros ($165 million), PSG will have to give Monaco one of its players. That remained the only hang-up, according to L'Equipe in its Thursday morning edition. 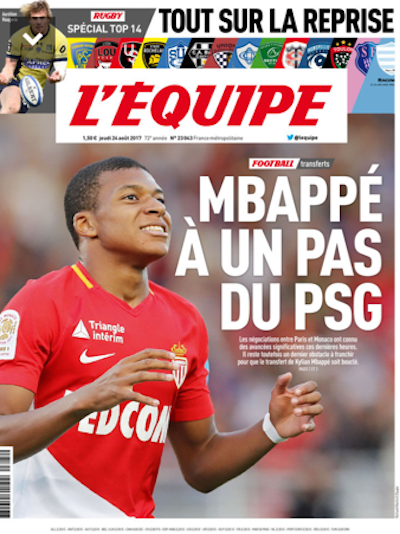 Three players were being mentioned as chips PSG might throw in to sweeten the pot: Brazilian Lucas, German Julian Draxler and Argentine Javier Pastore.

Lucas doesn't want to leave now that his Brazilian buddy Neymar has arrived from Barcelona. Draxler just moved to Paris and doesn't want to go. That leaves the 28-year-old Pastore as the likely odd man out at PSG.

Why would Mbappe want to leave after just one full season at Monaco? He scored 26 goals in all competitions last season when Monaco won the Ligue 1 title and reached the semifinals of the UEFA Champions League.

Monaco was perfect starting point for Mbappe's career. He was so young that he still lived in the dorms and didn't yet have a driver's license. Many former players advised Mbappe to stay in Monaco for another season and then move after the World Cup.

But the City of Lights appears to be too strong an attraction for Mbappe, who will make 18 million euros ($20 million) before taxes at PSG.

1. Paris is his home, or more specifically the town of Bondy, located seven miles from the center of Paris. Bondy is where his parents live: father Wilfried, who still coaches youth soccer there and serves as his agent, and mother Fayza, a former pro team handball player and Kylian's adviser on off-the-field matters.

2. PSG is France's best bet in the Champions League, better than Monaco this season. Monaco has extended its winning streak to 15 games with three wins to start the 2017-18 season, but it has already sold Benjamin Mendy, Bernardo Silva and Tiemoue Bakayoko, all starters on its great team last season.

3. PSG will allow him to play on Europe's new superstar frontline, alongside Uruguayan Edinson Cavani (49 goals in 50 games in all competitions last season) and Neymar.