A 4-0 loss to Japan at 2017 Vaclav Jezek Tournament in the Czech Republic marked the U.S. U-17 boys national team’s worst loss since falling, 4-0, to Mexico in a friendly in Panama in February of 2013.

The USA, which opened the Jezek Tournament with wins over Hungary (4-1) and Russia (3-1), beat Iceland, 4-0, in the third-place game while Japan beat host Czech Republic, 4-2, in the final. 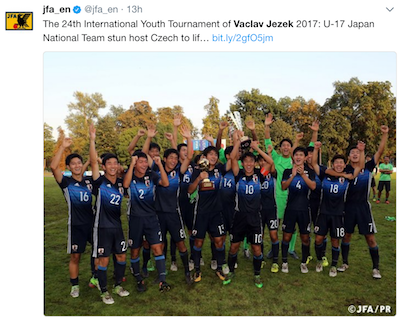 Coach John Hackworth’s team is preparing for the 2017 U-17 World Cup in India (Oct. 6-28). It had qualified by finishing second at the Concacaf U-17 Championship, where it fell to Mexico on penalty kicks after a 1-1 tie in the final. The USA had beaten Mexico, 4-3, in group play. In 48 games since the current cycle started in late 2015, the U.S. U-17s have lost only six games against national teams.

Japan, which in group play also beat Russia (1-0) and Hungary (5-2), and the USA were only teams at the tournament that had qualified for the 2017 U-17 World Cup. Against the USA, Japan took a 1-0 lead into halftime thanks to 27th minute on a goal by Keito Nakamura. Taisei Miyashiro’s goals in the 49th and 88th minutes sandwiched a 81st-minute strike from Koki Saito.

The U.S. U-17 girls national team, coached by Mark Carr, beat England twice in Oregon, 6-1 and 6-2. Nine players scored for the USA in the two games.

FC Dallas’ Diana Ordonez and Payton Linnehan of FC Stars of Mass scored twice each in the 6-2 victory. Isabella D'Aquila of So Cal Blues scored a goal in both games.

"It was a good week of learning and improvement in Portland,” said Carr. “I feel like we are in a good place with our team. …  We don’t have a camp in September so the players will get some quality time with their club teams and can focus on improving and continuing to prepare themselves for our October camp.

"With the World Cup Qualifying tournament set for the end of April in 2018, we now have a solidified target and I know the players will be motivated and committed to constantly improving themselves." 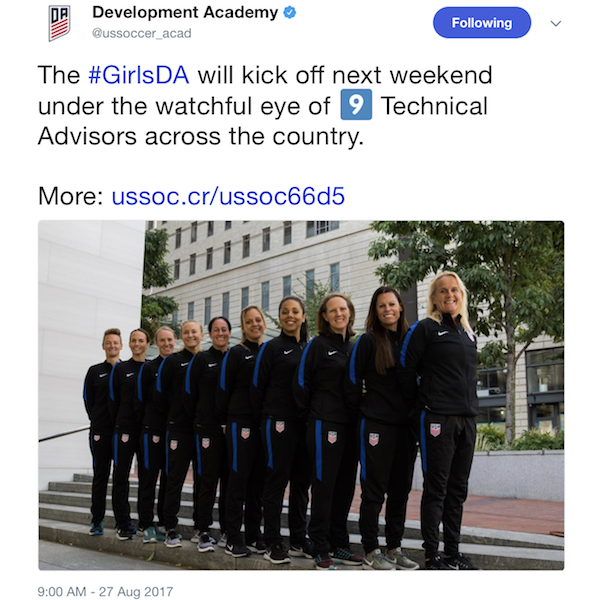 Technical Advisors, who serve under Academy Director Miriam Hickey, develop scouting networks comprised of U.S. Soccer scouts and collegiate coaches to help identify elite talent. The TAs will provide scouting reports and player data to the Director of Talent to identify players to be invited to Training Centers and the youth national team camps. The TAs also help evaluate and advise clubs in their region.

• Ferrell most recently served as Senior Manager of Coach Recruitment and Education at New York Red Bulls, where she managed 171 part-time coaches. She has also been as an assistant women's coach at Fairleigh Dickinson and Seton Hall. She played semi-pro ball for the New Jersey Wildcats of the USL W-League.

• McCormick served as the head coach of DePauw's women's team and since 2015 has worked as a U.S. Soccer Training Center staff coach and as a coaching education instructor for the Indiana Soccer State Association. She played for Indiana United of the WPSL in 2009-2012.

At 15 years and 89 days, Gianluca Busio  became the second-youngest player in MLS's 22 years to sign with MLS when he inked a Homegrown contract with Sporting Kansas City. Busio, who joined Sporting KC after moving from his home state of North Carolina in 2016, recently starred for the USA at the Concacaf U-15 Championship. Click HERE for more on Busio.