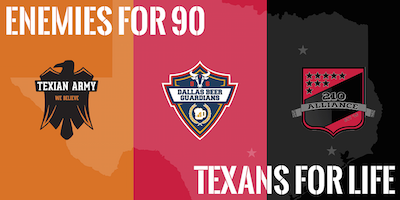 The Dallas Beer Guardians are accepting donations at Peticolas Brewing Company in Dallas and at their tailgate party before the FC Dallas home game Saturday against the New York Red Bulls.

Both the 210 Alliance (next away watch party) and Texian Army (Sept. 9 tailgate party) have set up plans for drop-off locations, and all three groups have established online options to donate money.

-- The Kraft family, owner of the New England Revolution and NFL Patriots, is offering to match all funds donated to the American Red Cross in support of Hurricane Harvey Disaster Relief Fund up to $1 million.

"We are eager to provide our support and hope by matching donations we will encourage more people to give to help ease the recovery of our displaced neighbors," Revs investor/operator Robert Kraft said. "And we wish all of our friends at the Houston Dynamo and their fans the best during this time of need."

Another reminder that we need to help right now. Houston Shelters in urgent need - donate to @RedCross by texting Harvey to 90999 https://t.co/GWjrePqn1h