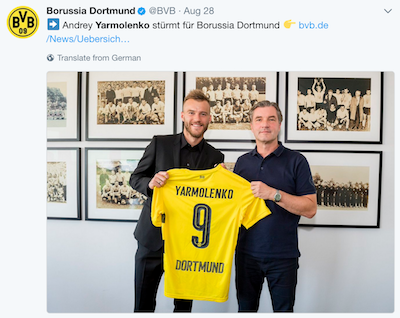 In opening wins over VfL Wolfsburg (3-0) and Hertha Berlin (2-0), Pulisic scored and assisted in the first, and was Kicker’s highest rated Dortmund attacker in the second. After two games, Pulisic ranks No. 5 on Kicker’s list of Topspieler. And many in the German media declared that Pulisic was a suitable replacement for Dembele, for whom BVB is collecting transfer fee of $176 million from Barcelona.

Still, BVB bought Yarmolenko from Dynamo Kiev, for which he scored 137 goals and assisted 89 times in 339 competitive games. (He also collected 60 yellow cards and five red cards.) The 27-year-old is a left-footed player who excels on the right wing, a la Arjen Robben, cutting inside to unleash powerful left-footed shots. For Ukraine’s national team, Yarmolenko has scored 29 goals in 69 appearances.

The three-time Ukraine Player of the Year, who has spent his entire career at Dynamo Kiev, helped the club end Shakhtar Donetsk’s five-year reign as Ukrainian champion when he notched 14 goals and 14 assists in the 2014-15 season. The following season, he helped Kiev reach the knockout stage of the UEFA Champions League for the first time in 17 years, when Andriy Shevchenko starred for the club.

BVB sport director Michael Zorc said the club had been trying to lure Yarmolenko to Germany since 2015.

So what does his arrival mean for Pulisic?

Ulrich Hartmann of the Süddeutsche Zeitung suggests Pulisic and Yarmolenko may split time on the right flank. Danial Montazeri of Spiegel Online wrote that, “Clearly, Yarmolenko wasn’t acquired for the bench,” and that he could be used on the left wing (although he’s played exclusively on the right wing of Kiev).

In Pulisic’s favor is his versatility. When he broke into the Bundesliga at the middle of the 2015-16, Pulisic played six games at left wing, one in central midfield, and one on the right wing.

In his second season, when Pulisic got 15 Bundesliga starts and came off the bench in 14 games (for 29 appearances in the 34-game season), he played mostly on the right side, but appeared a couple times on the left wing and eight times as a central midfielder.

In the first two games of this season, Coach Peter Bosz started 23-year-old Maximilian Philipp, who arrived from Freiburg this season after winning the U-21 European Championship with Germany, on the left wing. Veterans Andre Schuerrle und Marco Reus, both left wing options, are both out injured. For the time being, if Yarmolenko lines up on the right, Pulisic could replace Philipp on the left. 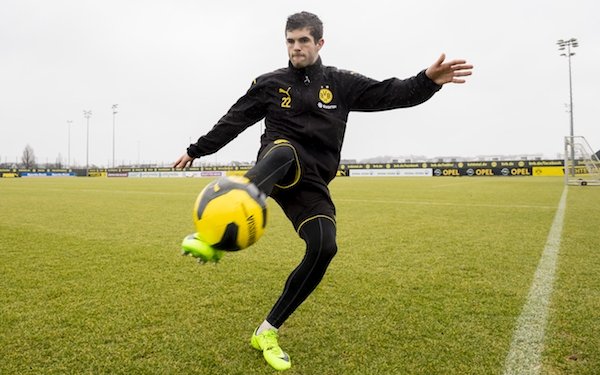 Montazeri pointed out that Yarmolenko will have to adjust to a higher pace in the Bundesliga, and that he has to break a bad habit: “In Kiev one saw Yarmolenko, after losing the ball, standing with hands on hips. That hardly mattered for Dynamo, which overwhelmed its opponents. But at BVB, shutting down after losing the ball isn’t tolerated, especially under Coach Bosz.

BVB’s Dutch coach expects his team to regain possession within five seconds of losing the ball. In addition to his other attributes, Pulisic’s defensive diligence has already endeared him to Bosz.

Last season, Pulisic appeared in 43 competitive games (including 10 Champions League and four German Cup games), starting 20 of them. With Dortmund again playing in three competitions, it’s not so much whether Pulisic will get ample playing time — that’s a given — but how consistently he’ll start.

When Pulisic returns to Germany after World Cup qualifying play for the USA, Borussia Dortmund, starting with its Sept. 9 Bundesliga game at Augsburg, will play seven games — including Champions League clashes with Tottenham and Real Madrid — in 22 days. The stretch will reveal plenty on how the young American handles his latest challenge.