The claim to require promotion and relegation be adopted across all U.S. divisions is a subject of a legal abstract by Steven A. Bank. The Paul Hastings professor of business law at UCLA examines the claim by the NASL's Miami FC and Kingston Stockade FC of the NPSL against U.S. Soccer, Concacaf and FIFA in the Court of Arbitration for Sport.

"Will U.S. Soccer Be Forced to Adopt Promotion and Relegation?" (about to be published by the Journal of Legal Aspects of Sport) details the legal and practical challenges of arguing FIFA mandates pro/rel and it's ignoring its own rules by refusing to order U.S. Soccer to open its "closed" Division I league, MLS.

The case centers on the interpretation of FIFA's Article 9:

Paragraph 2. "In addition to qualification on sporting merit, a club’s participation in a domestic league championship may be subject to other criteria within the scope of the licensing procedure, whereby the emphasis is on sporting, infrastructural, administrative, legal and financial considerations. Licensing decisions must be able to be examined by the member association’s body of appeal."

These are the principal hurdles ...

Jurisdiction:
The legal ...
That old legal theory "ripeness" jumps out. Is there even a dispute for CAS to arbitrate? Is “non-enforcement” of the FIFA regulations -- the basis for the case -- enough to seek an appeal? And should Miami FC and Kingston Stockade FC not first exhaust their remedies through the FIFA chain of appeals? Like all courts, CAS doesn't want its docket clogged up needlessly if another body can resolve the dispute.

The practical ...
FIFA could simply save CAS the trouble of hearing an appeal by resolving the ambiguity and revising or repealing the regulation, clarifying that it never intended to apply pro-rel regulations to closed leagues operated in the United States as well as Australia and now India.

Application of law:
The legal ...
The argument that FIFA's Article 9 requires pro/rel is not as strong as it might appear. It is not clear the pro/leg regulations were intended for all leagues structures or rather those leagues that operated pro/rel.

The practical ...
Even if the principle of Article 9's sporting application -- pro/rel in whatever form -- was upheld that doesn't mean a team simply wins its league, finishes second -- whatever -- and moves up. Article 9 allows a licensing procedure -- rigorous in professional leagues like in France and Germany -- that might require teams seeking promotion to meet Division I standards (ownership financing, stadium plan and fan support) that few could meet.

Remedy.
The legal ...
A court won't seek declaratory judgment without an immediate harm that its intervention would remedy. Miami FC and Kingston Stockade FC claim they are denied the benefits of promotion -- playing in premium leagues and competitions -- yet there is no immediate promotion they are being denied.

The practical ...
CAS could tell teams seeking promotion to come back later when they've won something. But just arguing "pro/rel" without knowing the licensing standards a federation implemented for promoted teams would be arguing "pro/rel" in a vacuum and become the next legal barrier.

Banks suggests the pro/rel fight is more of a political fight than a legal one -- putting U.S. Soccer, seeking the 2026 World Cup, under pressure to cave -- and pro/rel might be ultimately doomed -- its proponents hoisted by their own proverbial petard -- like a federation's power to enforce divisional standards.

If the courts decided to strike down them down, anyone could launch a league to rival MLS. Just like anyone would be free to launch a league with a pro/rel component if they wanted.

Only these leagues wouldn't be mandated from on high. 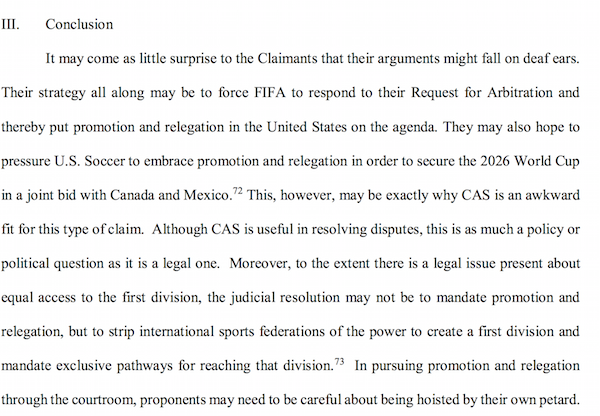