A new era for girls soccer: Development Academy kicks off in competition with ECNL.

U.S. Soccer began its ambitious involvement in youth soccer on the boys' side because it saw more urgency to improve its men’s national team program; the U.S. women were already a world power.

The Federation also benefited from the 2009 launch of Elite Clubs National League, the ECNL, which served a similar role for the girls as the DA did for boys. Indeed, the ECNL, currently comprised of 80 clubs, became the main source of talent for the national team program, spawning stars such a Mallory Pugh.

However, U.S. Soccer had for years considered launching a Girls Academy, and no doubt had an obligation to pour resources into the girls game in a similar manner as had been on the boys side. (U.S. Soccer’s financial aid program, for example, has paid out more than $2 million in scholarship funds for DA players in the last decade.)

“It is critical that we don’t fall behind those countries that are fully supporting the women’s game financially, and have put structures in place to identify the best players and develop them in professional environments which in the past were only accessible to boys,” said Development Academy Director Miriam Hickey.

A key component of the DA is linking the national team program to the clubs. U.S. Soccer’s nine Technical Advisors develop scouting networks to help identify players to be invited to Training Centers and the youth national team camps. The TAs also help evaluate and advise clubs in their region. 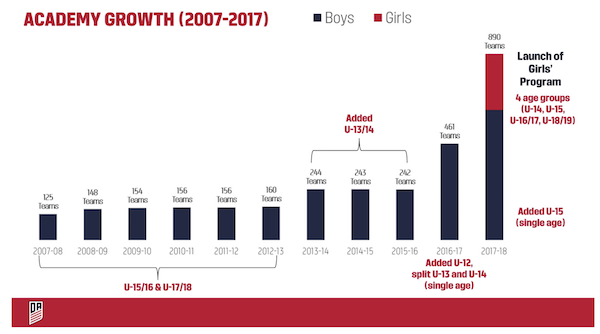 In addition to in-person scouting, every single DA game will videotaped by the home team and made accessible to national team scouts and coaches.

“When U.S. Soccer makes a decision to create a platform like the Development Academy, we pour resources, people and brain trust into it,” said April Heinrichs, U.S. Soccer women's national team Technical Director

About 10,000 players will play in the ECNL this season.

No doubt, the Girls DA and the ECNL are competing for the nation’s elite talent.

“We know the standard of play in the ECNL after eight years of development, and I expect it to get better every year, like it has,” says ECNL President Christian Lavers. “In the short term, this is a significant and immediate increase in the number of clubs and players who are trying to play at the highest level.

“In the long term, if everybody's doing a good job, and everybody's getting new resources, it should be a great thing for the country. It would be great if there are 16,000 players capable of playing at this high a level." 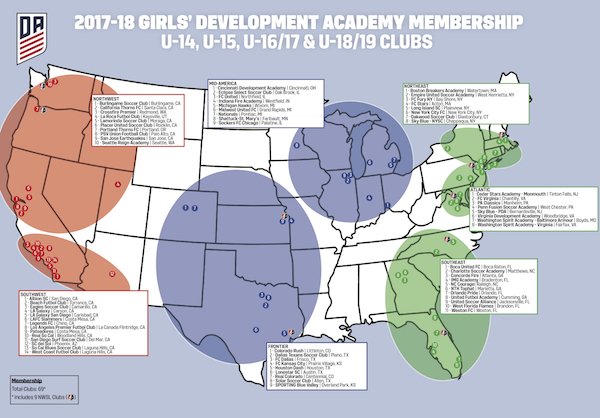 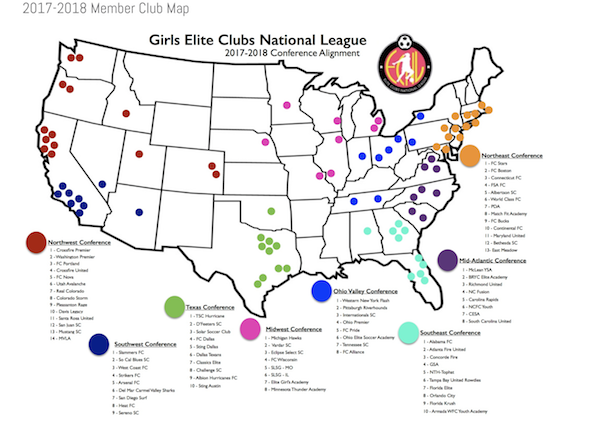 The Iran game will mark the second meeting between the two nations in women’s soccer. In April of last year, the U.S. U-16 girls national team beat Iran, 6-0, at the Women’s Torneo Delle Nazioni

The 2001s are forward Jordan Canniff, midfielder Astrid Wheeler and defender Kate Wiesner, who have been called up from the U.S. U-17s.

Three key U-20 players -- midfielders Jaelin Howell (1999) and Brianna Pinto (2000) and forward Sophia Smith (2000) – who are still playing youth ball have called up to get additional experience vs. U-20 competition. (Because the majority of U-20s are involved in college soccer, Coach Jitka Klimkova’s team has limited programming during the fall.)

All the players on the roster are eligible for Klimkova’s team, which is aiming to qualify for the 2018 U-20 Women’s World Cup (for players born in 1998 or later).