How youth soccer has changed in the past four decades

Having officiated my 10,000th game on August 8 gave me a chance to reflect on the many changes that have occurred on the American youth soccer landscape since I took up the whistle in 1978 and was a youth player in the 1970s. Here are some of them:

The Girls. Mia Hamm, Julie Foudy, Kristine Lilly and Brandi Chastain and now the current members of the U.S. women’s national team have been very good role models and their amazing success on the field has translated into millions of girls taking up soccer. When I started refereeing, girls teams were only 25% of the sport while now approximately half the players registered in youth soccer are girls. All while the number of players has increased exponentially. 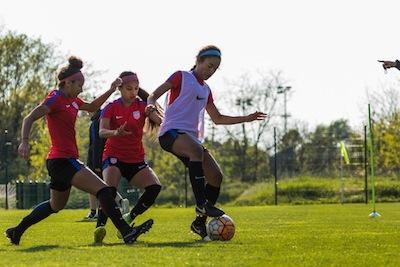 The Teams. It was simpler back in the 1970s as we had intramural teams and travel teams and all the players were from the same school district. Then came travel team players switching teams that corresponded to the rise of free agency in the major American pro sports.

All these Premier youth clubs were founded, each thinking and marketing that they could build a better mousetrap, and seemingly every travel team now wants to call themselves premier. If “premier” means just the very best teams, the moniker is a farce. I refereed two undefeated teams in a premier league recently and both teams struggled to put four passes together.

The Money. I hear complaints all the time from parents as it costs a lot of money for many kids to play youth soccer. The increased money is for all the travel that some teams are now doing as well as going to coaching fees. It’s not going to increased ref fees, at least in New York where I live, as we have been receiving an inflationary raise every few years for the past four decades. Wouldn’t it be nice if coaches did the same with their fees?

The Players. Only with Latino kids did I ever see children and teens play pick-up soccer outside their youth team, and not under the supervision of a coach, prior to the 1994 World Cup. That has all changed, partly through all the soccer that kids can now watch on TV. See a game and many are now going to a field or their backyard later to practice a move.

What has greatly improved in players during the past four decades is their tactical awareness and dribbling ability. Unfortunately, some of the older youth players, mainly on the boys side, now go down very easily when touched. Again, all the soccer they are seeing on TV.

The Games. It used to be that if you had teams from different cultures playing against one another, the game would often be problematic. For example, many Anglo teams hated it when the teammates on an opposing Latino team spoke Spanish to one another. Now, it’s much more accepted by the Anglo kids, a growing number who speak Spanish, as players from different cultures are getting along, at least on soccer fields.

The Fields. Many youth soccer games during the 1970s were played on football fields and those fields were long and narrow––120 yards by 55 yards or so. Not the best size for a good game. Then came the rise of soccer field complexes and now artificial turf fields, all with appropriate field sizes. Artificial turf is a good solution for overused fields that were reduced to dirt but I prefer a good grass field to any turf field as it’s a different game on turf since the ball moves much faster.

I would like to offer that whether it was back in the 1970s or today, if a youth player is having fun while learning the fundamentals as well as sportsmanship plus has a coach who cares about him or her, a lot of good things will happen to that player, both on the soccer field and off. That was what certainly happened to me.