Pulisic learns his harshest lessons against Costa Rica and Honduras

One point, one goal.

On both counts, the last two Hexagonal matches fell short in terms of production, so analyzing the 2-0 loss to Costa Rica and 1-1 tie with Honduras requires delving into matters well below the scorelines.

Concerns about the back line, which cropped a few times during the Gold Cup, recurred as evidence piled up that without centerback John Brooks and right back DeAndre Yedlin, both injured, and Jorge Villafana yet to prove himself the answer at left back, the Americans are deep in terms of quantity but not quality.

Despite a lot of spotty and sporadic midfield play, the Americans created a fair number of chances either through approach work or the dreaded-but-occasionally effective long ball out of the back. In the latter category, Jozy Altidore tested Costa Rican keeper Taylor Navas when he latched onto a missile from Geoff Cameron, and on a similar ball Bobby Woodgot in behind the Ticos back line but the U.S. wasn’t able to get a shot.

Yet the overriding conclusion of 180 minutes of play is that the U.S. fortunes are ever more dependent on Christian Pulisic, who to be fair shouldn’t be shouldering such a burden at age 18 but with Clint Dempsey no longer a 90-minute man and he and Altidore still prone to petulance in pressure situations, the wunderkind is already wearing a bulls’-eye as the player opponents must stop.

Officially, Pulisic was fouled seven times in the two games and if he played hockey, the number of hits he’d taken would also be officially logged. On ice, hits include body checks and collisions near the boards along with fouls that result in penalties, and the defensive concept of taking the body as hard and as often as possible is to induce fatigue as well as pain. 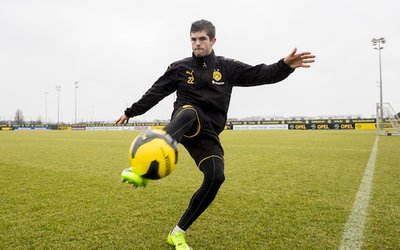 Pulisic had to pull himself to his feet gingerly a few times and hobble his way back to full speed on more than one occasion. Though he and his teammates struggled to find a consistent tempo against Costa Rica, he did manage to take four shots: an attempt from a bad angle with two teammates in the box; a close-range attempt blocked by Kendall Waston; a ball played behind him that he skied well over the bar; and the left-footed effort that took a deflection and required a spectacular Navas save to keep out of the net.

The latter shot drew the most notice, yet the ball was not struck all that solidly and probably would have been easily saved by Navas if not for the abrupt change in direction. His first attempt, which fell in the early minutes, can be blamed on the anxiety and nerves felt by all players, not just young ones, in the early minutes of a big match. From near the byline, with a couple of teammates in the middle calling for the ball, just about anything is better than blasting into the side netting.

The first-time shot blocked by Waston wasn’t the worst choice, though the veteran centerback was only a yard in front of the American and had most of the angle closed off. On the ball played behind him, just reaching it required a long stretch of the left leg and he couldn’t tell that no opponent was near enough to make a tackle. It’s a measure of his skill and agility that he got enough foot on the ball to change its direction towards the goal, albeit well over it.

These are the moments by which young players improve and mature and there will be many more of them for Pulisic, who has already assumed a stature of importance to the U.S. well beyond what is required of him at Borussia Dortmund. For though he’s a midfielder and not tasked with the same responsibilities as a forward, the fact remains that in the current corps of attackers he will be asked to score goals for the U.S.

Much consternation is generated amongst fans and observers when he’s deployed in a wide position rather than centrally, though head coach Bruce Arena maintains that Pulisic has the freedom to go wherever he wishes.

“He had a tough, tough game today,” said Arena after the final whistle ended an agonizing night at Red Bull Arena. “Obviously, they paid a lot of attention to him. You could see early in the game, they sent a second player to him; I think he got a little frustrated.

“They defended very well against him. Give them credit, they came out with a very aggressive posture and pressed us up the field. Clearly, conceding the first goal, they weren’t going to come out a whole a lot so we had to try and break down seven, eight players for long periods of the game.”

In the Honduras game his one shot, set up by Jordan Morris, was saved. Most of his passes went astray and none of them provided a scoring chance for a teammate. But if anything, he stuck to his task better than he had in the first game in which several refereeing decisions by John Pitti provoked angry protests from him and his teammates.

Many of the issues he is facing –- referees, poor fields, heat and humidity – are specific to Concacaf and the Hexagonal, and can severely test veteran players as well as the newcomers. He will be under a lot of pressure at Dortmund as well; a third-place finish triggered the departure of head coach Thomas Tuchel and replacement Peter Bosz has been joined by several new players.

A better U.S. team around Pulisic will aid and speed up the adaptation to international play, but that factor he cannot do anything about. He will take his 17th and 18th caps as harsh lessons for the next round of qualifiers, in which the stakes will be even higher than they were last week and opponent will be just as wary of the young and precocious American No. 10.