Those getting tired of Bayern Munich’s Bundesliga dominance -- it has won the last five titles – have been treated to a good serving of schadenfreude: a 2-0 loss to Hoffenheim, criticism of the club by its leading scorer, Robert Lewandowski, complaints about the coach from fan favorite Thomas Mueller, and a tantrum from Franck Ribery.

Last season, Bayern lost only two of its 34 Bundesliga games, the first defeat coming after a starting the season with 10-game unbeaten streak.

Losing its third game of this season means Borussia Dortmund, despite a 0-0 tie at Freiburg, remains in first-place.

After Bayern’s previous Bundesliga game, Mueller, the 2014 World Cup champ, stayed on the bench for the first 70 minutes of a win over Werder Bremen and addressed Coach Carlo Ancelotti afterward.

"I don't know what qualities the coach wants his players to have, I just know that mine aren't on the list," said Mueller.

That drew this response from club CEO Karl-Heinz Rummenigge:

“I am a friend of democracy and freedom of opinion … But what Mueller said Bremen is not OK. 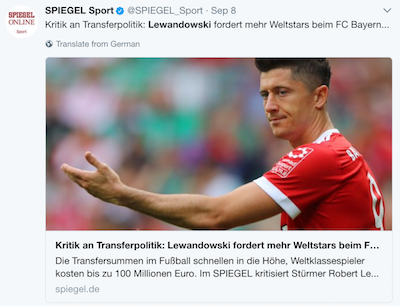 But Mueller’s comment was small beer compared to what Lewandowski, the team’s leading scorer since arriving in 2014, said in what was described as an "unauthorized" interview with Spiegel Magazine. He criticized Bayern’s transfer policy, its preseason exhibition game trips, and cited Bayern’s stranglehold on the Bundesliga title as making the league less interesting to the international audience.

"Bayern will have to come up with something and be creative if the club wants to keep bringing world-class players to Munich,” said Lewandowski. who wants to add a Champions League title to the four Bundesliga crowns he's won with Bayern and the two he won with Borussia Dortmund. “And if you want to compete at the top, you have to have those kinds of quality players.

"To this day, Bayern Munich has never spent more than around [$45 million] for a player. In international soccer that has long since been more of an average than a peak price."

Bayern, which has failed to win the UEFA Champions League since 2013, broke its transfer fee record this summer with the $46.2 million purchase 22-year-old French midfielder Corentin Tolisso. Its total offseason spending on new players was about $100 million. No chump change but far less than spent by the likes of Paris Saint-Germain, Barcelona, Real Madrid or the top English Premier League teams.

Lewandowski also said that Bayern’s preseason international trips, this year to Asia, were a waste of time:

"I'm skeptical about foreign trips. Not just because the strain during this important training period is so high, but also because I'm not really convinced they are of such great benefit to the club's marketing."

Better would be a competitive Bundesliga title race.

"If you have more top games," he said, "you have more show, more razzmatazz, and you can increase TV coverage to the world beyond. Fans want to see the big showdowns, the stars of the league, the battles for the championship. That would make the Bundesliga more interesting outside of Germany."

In 2009, when Philipp Lahm gave an unauthorized interview with Spiegel, Bayern fined him $60,000. No word of any fines yet for Lewandowski, but Rummenigge threatened:

“Who publicly criticizes the coach, club or teammates, gets stress from me personally. … He is employed by us as a player and earns very much money. Even last season he complained about his teammates not supporting him enough.”

On Tuesday, Lewandowski scored Bayern’s first goal – with a penalty kick after he was fouled – in a 3-0 win over Anderlecht in its Group B Champions League opener.

But all did not go smoothly. When Franck Ribery was replaced by Mueller with 12 minutes left, the Frenchman sauntered off the field, steered clear of Ancelotti, and tossed his jersey toward the bench.