The results of Jordan Morris' MRI came back, and Seattle Sounders coach Brian Schmetzer said the U.S. international suffered a "significant strain," which will rule him out for weeks. That would impact the Sounders' stretch run for the Western Conference regular-season title and rule him out of the USA's World Cup qualifiers in October. 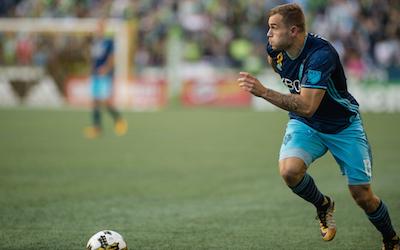 Morris was injured in the second half of the Sounders' 1-1 tie with the LA Galaxy Sunday night. It came five days after he played the entire 90 minutes and assisted on Bobby Wood's tying goal for the USA in its 1-1 tie with Honduras in World Cup qualifying.

Morris was the MLS Rookie of the Year last season as he scored 12 goals in 34 games for the Sounders, who won MLS Cup for the first time. He has scored only three goals in 23 games for Seattle in 2017.

Schmetzer at practice on Wednesday: "He's obviously ruled out for the weekend. We're not talking about days any more, we're talking about weeks with this one. The MRI came back and showed a significant strain. He is a tough kid. We will take it week by week. Last year he tweaked his hamstring. This one obviously a little bit more than last season. But he came back in relatively fast fashion."

Schmetzer's options. Schmetzer added that only time will tell when Morris will return to help the Sounders. Their 1-1 tie with the Galaxy dropped them into second place in the Western Conference, a point behind Portland.

Schmetzer does have a lot more attacking options than he did last season when Clint Dempsey was lost for the last four months with a heart ailment.