In the battle to score the fewest goals in MLS, D.C. United “leads” Colorado by two goals but with a couple of recent signings may have done enough to close the gap down the stretch. 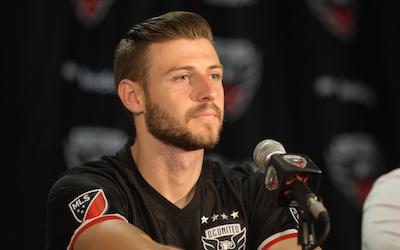 Colorado has scored 25 goals in 27 games (0.93 per game) and United is lagging behind with 23 goals in 28 games (0.82). A three-game winning streak – all by 1-0 scores – ended last weekend when United lost at home to Orlando City, 2-1, and D.C. got its only goal in the 89th minute through defender Kofi Opare. He and centerback partner Steve Birnbaum combined for seven of United’s 18 shots.

“The guys kept fighting, which is all you can ask,” said Birnbaum after United’s win streak ended against a team that hadn’t won in its last nine games. “It’s tough giving up two goals like that at the beginning of the game.

“They had a strategy and it worked out for them in the beginning and I think we kind of figured it out as the game went on, but I’m proud of the guys for the way they fought. There were great chances out there and we just didn’t get it done.”

Scoring in four straight games is rarely cause for celebration but remember, this United team failed to score its first three games of the season and has been blanked in exactly one-half (14/28) of its matches.

It hasn’t done a lot right this season, but the August signings of winger Paul Arriola and Zoltan Stieber have at least raised hopes among D.C. fans that its brand-new Audi Field won’t be an offensive wasteland when games commence there next year.

Against the Lions, Arriola and Stieber combined for three shots and four key passes and though neither has yet logged a goal nor an assist, they’ve added mobility and some guile to a very stagnant attack. In a combined seven games, they have created 17 chances. Luciano Acosta leads the team with a modest five goals yet that’s three more than anyone else. Opare’s second goal of 2017 moved him into a four-way for second on the team.

“As difficult as this loss is, this is an exciting group and I’m thrilled with the groups’ mentality since we’ve made some changes and additions,” said head coach Ben Olsen. “I look forward to these guys having to bounce back from a loss.”

Arriola twice burst clear of the OCSC defense to threaten its goal. He swapped passes with Patrick Mullins, whose shot forced a good save from keeper Joe Bendik, then got on the end of a Stieber cross and headed it just wide. Stieber shot into the side netting late in the match prior to Opare cashing in a Marcelo Sarvas cross. D.C. lost at home for the seventh time this season in another case of too little, too late.