Emails pull back curtain on options of NYCFC's owners

The release of #Otaibaleaks -- the hacked emails belonging to Yousef Al Otaiba, the United Arab Emirates‘ U.S. ambassador -- offered insights into what was the thinking of the now owners of New York City FC as they debated their final decision about joining MLS. 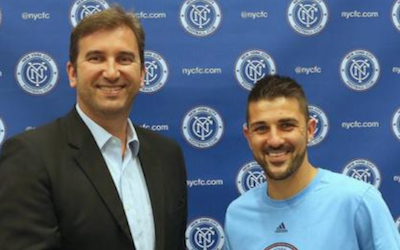 MCFC/CFG/UAE/AD. The key to understanding their motivations and concerns is to understand the acronyms here in an outline of the pros and cons of the choices they had:

The majority owner of the City Football Group is the Abu Dhabi United Group, a private equity company owned by Sheikh Mansour bin Zayed Al Nahyan, the deputy prime minister of the United Arab Emirates and a member of the ruling family of Abu Dhabi.

UAE/AD concerns. One of the concerns expressed was that City Football Group and by extension NYCFC would expose the vulnerabilities of the United Arab Emirates and Abu Dhabi for their views on "gay, wealth, women, Israel."

Stadium options. The email chain took place among Al Otaiba and City Football Group directors Martin Edelman, Simon Pearce and Ferran Soriano. Pearce outlined the four options they had as they were faced with the issue that the stadium site in Flushing Meadows, Queens, MLS was exploring might not work out.

The Flushing Meadows deal never worked out as local groups, including the baseball Mets, opposed the idea of a soccer stadium in the area. Pearce expressed concern in his outline about MLS's "political capacity/competence/proactivity."

Soriano's solution. Pearce then outlined to Al Otaiba what Soriano proposed -- and City Football Group has done -- start NYCFC, play at a rented facility for three years and then begin a stadium search with the club more established in the community.

NYCFC is finishing up its third season at Yankee Stadium, owned by the baseball Yankees, NYCFC's minority owners. It is in second place in the race for the MLS Supporters' Shield and little by little becoming entrenched in the New York community with a top-to-bottom Development Academy program.