Goalkeeper crushes player's face in Germany: Will this be the wakeup call?

The hero of last weekend’s Bundesliga action was Raymond Best, the doctor credited with saving the life of VfB Stuttgart captain Christian Gentner after VfL Wolfsburg goalkeeper Koen Casteels smashed his knee into Gentner’s face. Most, but not all, of the immediate comments from referees and TV commentators expressed shock at the referee's response.

In the 85th minute of the game, the Belgian keeper ran 12 yards off his line, jumped up to punch the ball, leading with his knee. 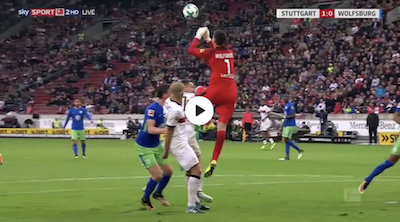 Best didn’t wait for permission to enter the field. He attended quickly to the unconscious Gentner, who was choking on his swallowed tongue, and pulled it clear.

Referee Guido Winkmann, who had yellow-carded Casteels in the 26th minute for running out of his penalty area and knocking down the dribbling Simon Terodde, did not call a foul on Casteels brutalizing Gentner.

No penalty kick, no card. 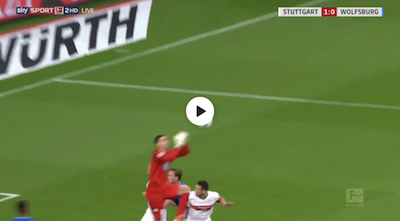 Some German commentators speculated that a malfunction had disabled the Video Assistant Referee, who had access to the replays that revealed how horrific the challenge was.

But later came a statement from the DFB that VAR was working fine, that Winkmann ruled it an “unfortunate collision,” and that video referee Deniz Aytekin agreed with him. The DFB’s referee manager Helmut Krug said the no-call was “borderline by the letter of the law but reasonable.”

Deutsche Welle reporter Jonathan Harding pointed out Krug’s inconsistency. After goalkeeper Manuel Neuer’s infamous knockdown of Gonzalo Higuain in the 2014 World Cup, Krug said "Germany was very lucky" because "while the goalkeeper played the ball, he caught the opponent. For us, that's a penalty and a yellow card."

VfB Stuttgart, which held on to its 1-0 lead, had to play a man down during the final five minutes of regulation and eight minutes of stoppage time.

Wolf added: “It was a clear foul. The knee up nearly two meters in the air. I find it astonishing that it be judged differently. … He can jump without raising his knee all the way up. That’s possible. And Christian wasn’t even threatening him.”

Gentner was one of three field players near the ball. None was jumping toward the ball that was arriving from behind them.

Bild Zeitung pointed out that on the same weekend there were two “Rambo fouls.”

RB Leipzig’s Naby Keita gets a red card for kicking Christoph Kramer in the face. Casteels goes unpunished for kneeing Gentner in the head. Keita is a field player; Casteels a goalkeeper.

“A tradition has arisen in soccer that it is OK for goalkeepers to crash into opponents, often with a knee making contact with the opponent’s head, or for them to throw themselves at the feet of moving opponents. Those actions, carrying a high risk of nasty injuries to both the keeper and his opponents, are considered acceptable.”

Indeed, Casteels excused his high-knee assault by saying: "If that's a foul, you have to change the coaching at youth level from 5, 6 years old, [when] you're taught to take the left knee with you if you jump up with your right. 99 percent of goalkeepers do it that."

Perhaps because the injuries Gentner suffered were so severe, the images of his bloodied face so disturbing, and the replays so clearly showing recklessness and excessive force, the live TV commentators called for a penalty kick -- and the former refs who serve as pundits in the German media did not accept Casteels’ excuse.

Thorsten Kinhöfer told Bild: “For me it was red and a penalty kick. Goalkeepers may be taught in their youth to pull their knee up while jumping to demand respect and keep the opponent at bay. But even if you inadvertently hit a player, it is a foul.”

“The goalkeepers often play like that and are rarely penalized. … With field players we see it a little differently when they come high with an elbow we say it’s yellow at least or even red. Here the knee is actually used as a weapon. You can’t go so recklessly into a challenge like that. … For me it was a clear penalty kick. At least yellow-red for Casteels.”

Other former referees, such as Bernd Heynemann and Carlo Bertolini, also agreed it was an obvious foul.

VfB Stuttgart director Michael Reschke said he had “terrible fears” while Gentner was on the ground. The latest reports are that he is out for at least the rest of the season and will require several operations.

Casteels is free to play again next game.

“This situation will leave a long-lasting impression,” Reschke said. “I don’t think Casteels will do something like that in the next game and that many other Bundesliga goalkeepers will be thinking about how they go into challenges in the future, at least not with that kind of aggressiveness.”

But previous incidents around the world comparable to Casteels' didn't prompt a change to how keepers play and how refs react.

At least there seemed to be more outrage than usual about Casteels. And, although the DFB's response was depressing, the referee pundits did point out that, as Gardner explained, a solution lies in applying the existing rules not only to field players, but to the goalkeepers as well.

germany, international, referees
35 comments about "Goalkeeper crushes player's face in Germany: Will this be the wakeup call?".
Read more comments >
Next story loading