Primer: What NASL's suit against U.S. Soccer is all about

Less than three weeks after U.S. Soccer's board of directors voted to not sanction it as a Division 2 league for 2018, the North American Soccer League filed a Federal antitrust lawsuit against the federation in Brooklyn. For a look at the case, what has happened to the NASL to get to this point and the complicated history of soccer litigation.

What the NASL wants:

-- A preliminary injunction to maintain the status quo, keeping U.S. Soccer from stripping it of its Division 2 sanctioning as it moves forward into 2018.

-- A permanent injunction to eliminate U.S. Soccer's divisional structure, allowing leagues to operate without designations and without the Division 1 classification that, the NASL argues, gives MLS an advantage.

What the NASL alleges:

-- U.S. Soccer has divided men's pro soccer based on arbitrary criteria that it has manipulated to favor MLS, which is a commercial business partner via SUM, which sells and markets MLS rights combined with rights to U.S. national teams.

-- U.S. Soccer has selectively applied and waived its divisional criteria to suppress competition from the NASL, both against MLS and against the USL.

-- U.S. Soccer has sought to limit competition from the NASL to MLS and USL and now seeks to destroy the NASL by arbitrarily revoking the NASL's Division 2 status for the 2018 season.

The NASL was launched in 2011 after U.S. Soccer brokered a settlement between feuding USL league and club owners. The more ambitious club owners formed the Division 2 NASL and the USL retrenched as a Division 3 league.

-- Underlying problems in ownership structure remained as Traffic USA operated or funded half of the eight original NASL teams (much like AEG did in the first decade of MLS).

-- Traffic USA involvement became toxic when the FIFA corruption case broke in May 2015. Indictments were returned and arrests made in connection with a massive criminal enterprise at the center of which was Traffic. The NASL had nothing to do with the criminal enterprise involving the sale of marketing rights in Concacaf and Conmebol, but Aaron Davidson, the former NASL chairman, was indicted and later pleaded guilty.

-- The NASL was on life support by the end of 2016 when it dropped from 12 teams to eight as Minnesota United joined MLS, Ottawa and Tampa Bay bolted to the USL, Fort Lauderdale and Rayo OKC folded, and the New York Cosmos' ownership pulled out. 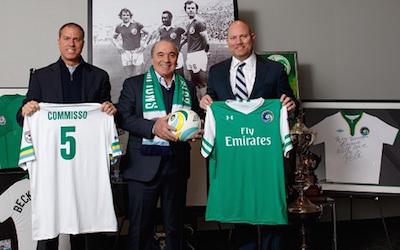 Soccer is unique among American pro sports because of U.S. Soccer and its authority over American soccer derived from FIFA. Since the advent of pro soccer in 1967, there has been a steady stream of legal challenges to U.S. Soccer's authority.

-- The outlaw NPSL sued the rival USA (fronted by foreign clubs for the summer), the USSFA (as U.S. Soccer was then called) and FIFA on antitrust grounds at the end of the first season. Before the case was decided, the two leagues merged -- there was hardly interest for one soccer league, let alone two -- and the NASL was formed, providing amnesty to players who had played in the NPSL without FIFA's approval.

-- The USSF "won" both antitrust cases in modern era: Fraser vs. NASL and Champions World vs. USSF. But both were won on technicalities, leaving the key issue of the federation's authority to oversee pro soccer unsettled.

In Champions World, which went bankrupt after promoting international matches, Charlie Stillitano, the firm's promoter had agreed to FIFA arbitration as a FIFA match agent, taking the case out of the court's hands. 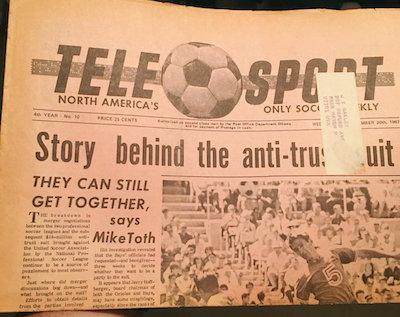 Tuesday's filing came as no surprise to NASL watchers. In 2015, the NASL was seeking Division 1 sanctioning and threatened to sue the USSF on grounds that it proposed to change the Division 1 requirements -- move the goalposts, so to speak -- related to league size and ownership wealth, among other things. (The pleadings in Tuesday's filing covered the 2015 dispute in great detail.)

The NASL's attorney then and now is Jeffrey Kessler. The longtime labor and anti-establishment attorney, perhaps best known for his suit against the NCAA, represented the MLS Players Association in Fraser and represents the Women's National Team Players Association against U.S. Soccer in its EEOC complaint.

Kessler was once on the other side in a fourth soccer case that provides a reality check for NASL owners and what may lie ahead in their suit against U.S. Soccer. Kessler has made a career of challenging the National Football League, and he represented the old NASL when it sued the NFL to strike down its ban on NFL owners owning teams in other pro sports leagues.

The NASL won on appeal in 1982 in a case that went all way to the Supreme Court, but by the time punitive damages were awarded -- all of $1 -- the NASL was on the verge of collapse. In the case of the current NASL, the great fear will be that clubs won't survive long enough to gain the benefits of any decision on the merits of its case.

If the NASL prevails in its antitrust suit, there will be no U.S. Soccer divisions to implement pro/rel. There would be nothing, however, to prevent the NASL or any other private league from launching a multi-tiered league with its own pro/rel component.

The X factor in NASL vs. USSF is FIFA's position. The one thing you should know about FIFA is that it has historically abhorred the court system -- and that was true long before the 2015 FIFA corruption case turned FIFA upside down.

It's been suggested that the filing of the suit will threaten U.S. Soccer's World Cup 2026 bid with Canada and Mexico. But Champions World was making its way through the courts in 2010 when U.S. Soccer was bidding for the 2022 World Cup. It lost out to Qatar, but that had nothing to do with FIFA's position on the litigation.

jurisprudence, mls, nasl, u.s. soccer
8 comments about "Primer: What NASL's suit against U.S. Soccer is all about".
Read more comments >
Next story loading