Josh Sargent, the 17-year-old St. Louis product who played in the U-20 World Cup earlier this year and is heading to the U-17 World Cup next month, will sign a pro contract with Bundesliga club Werder Bremen when he turns 18 on Feb. 20. 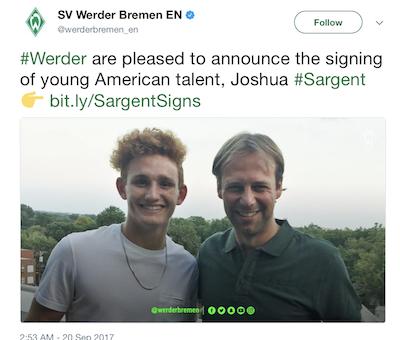 “It’s been very fun, traveling around the world, looking at different clubs and in the end I think it was just that gut feeling that Bremen felt like home and I feel like they are going to be a great fit for me,” said Sargent, a striker who scored four goals at the U-20 World Cup. “I think Bremen knows that day in and day out I’ll give it my all and do everything I can to win them a trophy.”

Werder Bremen is currently in 17th place of the 18-team Bundesliga. Its corps of strikers includes Aron Johannsson, who played for the USA at the 2014 World Cup but has played only four minutes in five games this season. Only one Bremen striker, Fin Bartels, has hit the net this season and Bremen has scored only three goals.

Sargent will arrive in Bremen early next year and begin training with the club's U-23 team before competing for a first-team spot next summer.

“What drew me to the Bundesliga and Werder specifically is, you can start to see young Americans starting to get minutes and capitalizing on those minutes and I’m hoping I can do the same thing,” said Sargent.

Christian Pulisic, who turned 19 on Sept. 18, has played made 43 Bundesliga appearances. Weston McKennie, who turned 19 last month, started for Schalke 04 on Tuesday in its loss to Bayern Munich, making his fourth first division appearance.

Sargent joined Scott Gallagher SC at age 8 and starred for its Development Academy team, playing for its U-16s when he was 14. He scored five goals at at the U-17 World Cup qualifying tournament that ended just two weeks before the U-20 World Cup.

“We have long had our eye on Joshua, so his superb performances at international play didn’t surprise us,” said Werder Bremen’s head scout Tim Steidten. “We are delighted that we still got him even though many other top European clubs made him offers.”