Expansion Reno 1868 set a USL record for most goals in a season -- 63 in only 28 games -- in its 3-0 win over OKC Energy FC, but that was overshadowed Wednesday night by an incident in the Phoenix-Sounders 2 game in which referee Katja Koroleva failed to send off a player on the winning Rising for picking up two yellow cards.

In the 60th minute, Phoenix rookie Victor Vasquez was shown a second yellow card. But Koroleva didn't send Vasquez off. 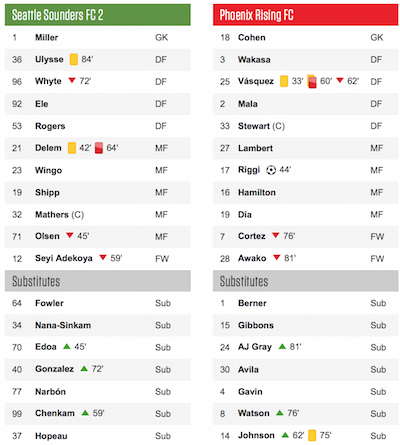 Verdict. USL issued a statement that the result -- a 1-0 victory for the Rising -- would stand but Vasquez would be suspended for his "red card" as would Jordy Delem of Sounders 2.