Some MLS clubs have waited years to get approval for their soccer stadiums to get off the ground. The Oregonian reported it's taken the Portland Timbers only five months to win city approval for a $57 million expansion to Providence Park that will add approximately 4,000 new seats to the stadium's east side. 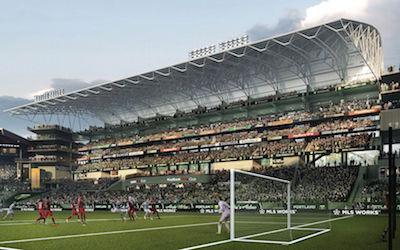 Plans. Besides the extra 4,000 seats that will take the capacity to 25,000 at Providence Park, the project will include:

Schedule. Approvals from the city council and the design commission will allow the Timbers, who have 13,000 fans on their season ticket waiting list, to begin work after the 2017 season. Work will continue in 2018 and 2019 for a 2019 completion. The plan is for the Timbers to open the next two seasons on the road to allow for work to continue.

Providence Park was originally built in 1926 in Portland's urban core and used mainly for baseball and football. Its location has made it difficult for the Timbers to expand to meet demand.

The Timbers have sold out every game. Current capacity is 21,144, and season tickets are capped at 15,800. The NWSL Thorns average 17,337 fans a game, more than six MLS teams average.