Not since Freddy Adu in 2003 has an American player entered the biennial U-17 World Cup under the kind of spotlight that will shine on Josh Sargent.

Sargent, who has already locked in a contract with Bundesliga club Werder Bremen, won the Silver Boot at 2017 U-20 World Cup with four goals and an assist in five games.

A day after announcing his roster for the U-17 World Cup that kicks off Oct. 6 in India, Coach John Hackworth, in a media conference call, addressed the challenge faced by Sargent, the youngest American to score at a U-20 World Cup, the “new” faces on the squad, and how he sees the USA’s first-round competition. 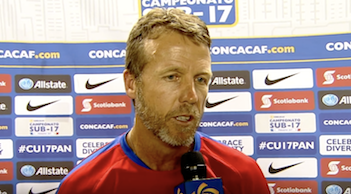 Josh Sargent’s quest
This is a big challenge for Josh because the only way he can improve on his U-20 performance is to win the U-17 Golden Boot, and that is hands down an incredible challenge.

But Josh doesn’t let that change the focus on how goes about his job. He’s motivated to get better on a daily basis. He fit right back in when he returned to our team. He’s got an excellent work ethic, he’s humble. He’s a good person off the field and is one of our captains, one of our leaders.

The four players who weren’t part of the qualifying squad.
Tyler Shaver is a center back who was in residency last year, meaning before this final year of preparation. Unfortunately he tore his PCL, which kept out for nine months and he wasn't released to train until last May. And he was able to come on our trip to Argentina in June.

Before his injury, he was a top center back and was an important player who had proven himself.

Jacobo Reyes was a young player when he moved from Houston, Texas, to [Mexican club] Monterry’s youth system. He had previously been in a U-14 camp. We invited him to several camps last year but his club couldn’t make it work. However, he was able to join us for our trip to Argentina in June and he really impressed our staff and fit in immediately with our players.

He can play anywhere across the front three and also in an attacking midfield role, and that versatility certainly gave him an advantage over some of the others. A quality person and a nice find for us rather late in process.

Sergino Dest [from Ajax Amsterdam’s youth program] was in two camps last year and played in Nike Friendlies in more of a reserve role. He’s a very attacking outside back, who can play right or left, so we’ve added some depth there.

Alex Budnik is a goalkeeper who had been with us in residency but we only took two goalkeepers to the qualifying tournament. 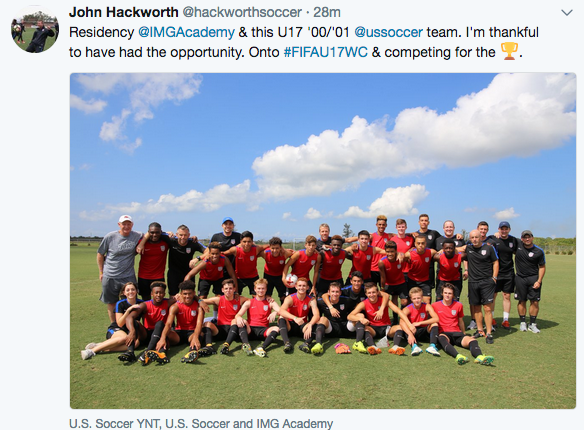 The Group A opponents
We’ve played India once before and we were successful [a 4-0 win in May 2016 in Goa] but it wasn’t them hosting the opening game of a World Cup.

I have heard that there will be a very loud crowd. They are an athletic, hard-working team. We have to beat the host country in the opener with a lot ceremony around it and that is a difficult challenge. 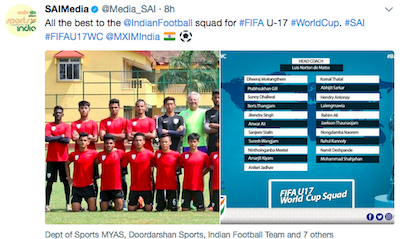 Then we have to shift to Ghana, one of the premier powers, especially at this level.

Colombia presents a combination of technique, creativity and some really good athleticism.

We really have to manage each game on an individual basis and it’s going to be difficult. At the same time, we feel confident.

We’ve beaten 10 of teams that are in tournament and some are some of the best teams in the world. We have reason to believe we can compete with anybody, and obviously now we have to prove that at the most important even at this age group.

• NOTABLE ABSENTEE. Arturo Vasquez, a starting central defender in qualifying, was injured last month in a 4-1 win over Hungary at the Vaclav Jezek Tournament in the Czech Republic. “One of our key players,” said Hackworth. “It’s going to be tough to replace him.”

• QUALIFYING RECAP: In group play, the USA beat Mexico, 4-3, marking the first U.S. victory over Mexico in U-17 World Cup qualifying and ending Mexico’s 25-game unbeaten streak at the Concacaf U-17 Championship. The USA also beat Jamaica (5-0), El Salvador (1-0), Honduras (3-0) and Cuba (6-2) before a falling to Mexico in the final on penalty kicks after a 1-1 tie.