Barron Trump, son of President Donald Trump and Melania Trump, is playing in U.S. Soccer's Development Academy. Barron moved to the White House from New York with his mother after finishing his school year in the spring, and he is playing for D.C. United's U-12 team.

Soccer journalist Pablo Maurer first tweetedthat D.C. United had rostered Trump, who is listed as a midfielder and having played four games this season. He attends St. Andrew's Episcopal School in Maryland. 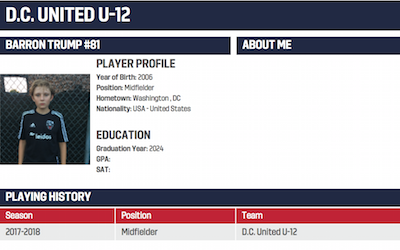 At the White House's annual Easter Egg Roll in April, Barron was wearing an Arsenal jersey and met with players from D.C. United.

“He was very knowledgeable about soccer, knew about D.C. United and was interested to know more," Patrick Mullins told the Washington Post.