Following Eric Wynalda on Twitter is fun, fascinating and foreboding all at the same time, and it can be exhausting as he darts from dark proclamations of doom to bold backings of anything anti-establishment when it comes to soccer.

Never short of something to say, whether or not it’s backed by facts or truths, he’s been hinting for at least a few weeks of taking a dramatic step, and on Friday he revealed it to The Guardian. 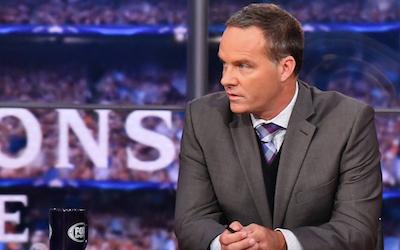 He says it's time to challenge the U.S. Soccer president in an election to be held early next year, prior to the World Cup, the struggles of which to reach by the U.S. team have ramped up criticism of incumbent Sunil Gulati. Wynalda played collegiately at San Diego State and along with earning 106 caps and scoring 34 goals from 1990 to 2000 represented clubs in Germany, Mexico, and MLS prior to his retirement in 2008.

Since then he’s coached several teams in different lower-division leagues and worked as a broadcaster and commentator for ESPN, Fox Sports and Sirius XM, and taken potshots at the soccer establishment at every stop along the way. Not for him are the escalating resources and revenues and promises generated by Major League Soccer, nor the – as he perceives – the staid and stagnant status of U.S. Soccer.

“I’ve stood back for two decades waiting for things to get better,” Wynalda told Guardian. “What I’ve realized is that there is not a whole lot of people who are willing or even wanting to invoke change. Out of moral obligation, I think I’m finally at the point where I’m asking, ‘What can I do to help?’ I don’t want to tweet something or write an article or start a fight. I want to roll up my sleeves.”

Not since the six-year rule of Werner Fricker ended in 1990 has a prominent former player served as federation president. Fricker lost a contentious election that year to Los Angeles corporate lawyer and sports attorney Alan Rothenberg, who had been soccer commissioner at the 1984 Olympics.

After serving as chair of the 1994 World Cup Organizing Committee and helping to found MLS, Rothenberg stepped down after two terms and was replaced in 1998 by Dr. Robert Contiguglia, a Denver-based kidney specialist, and youth coach who had been president of the Colorado Youth Soccer Association. In 2006, Contiguglia chose not to run, and Gulati, U.S. Soccer executive vice president at the time, ran unopposed and was elected unanimously.

It is this unchecked, unchallenged 11-year run of authority that many people, not just Wynalda, believe has steered U.S. Soccer off-course.

“I don’t think it is healthy unless there is a clear vision or a plan,” Wynalda said, though many programs directed as specific issues – such as the U.S. Soccer Development Academy and competitive youth teams run by MLS clubs –- have been initiated during Gulati’s tenure.
“Right now, it is just one guy who not only professes to be the smartest guy in the room and has an answer for every single question you throw at him but he has an agenda and that is why there is a lot of people saying enough is enough. His agenda is to stay in power and that is it.”

Now, some might think that a leader who “has an answer for every question thrown at him” can at least justify his policies and decisions, a few of which have cost Gulati credibility, such as a new four-year contract given to former U.S. head coach Jurgen Klinsmann before the 2014 World Cup. Firing Klinsmann last year resulted in a $6.2 million "accounting charge."

That contract was approved by the Board of Directors, a polyglot group of administrators, former players, and soccer officials such as MLS commissioner Don Garber and Motta that is headed by Gulati and current executive vice president Carlos Cordeiro.

The federation is awash with state associations, councils, programs, budgets and committees that require extensive oversight. For a job that pays nothing except travel expenses, it’s a big one and goes far beyond public matters such as negotiations with the U.S women's team and controversial termination of a contract with goalkeeper Hope Solo.

Gulati has not stated if he will run again but there is every reason to believe he will, and whether Wynalda’s “moral obligation” will resonate with the U.S. Soccer electorate, he will undoubtedly strike a chord with a small but vocal contingent of critics taking aim at Gulati, MLS, U.S. Soccer and just about anything else regarding the direction of the sport.

“I’ve had at least 50 calls from people encouraging me to run,” Wynalda told the Guardian. “Not just people on Twitter who want promotion and relegation and want the house of cards to fall. I’ve heard from people who want to know how we can make soccer better in this country.”

Wynalda may or may not know how to accomplish that feat, but he’s dead-certain the status quo is not working.

“People are no longer just interested or curious about soccer in the U.S.,” he said. “They are passionate. This is the moment to really give these people who are in love with the game a better product.”