I was an assistant referee and yellow was up 1-0 in the closing seconds of a Boys High School Summer League semifinal game. A maroon attacker was at the top of the penalty arc and he played the ball to a teammate a half-yard offside on my near side of the field, inside the penalty area.

Years ago, with a different wording and interpretation of offside, I would have raised the flag then as he was the only other attacker around, and there would have probably been no issues with dissent. But in order to increase scoring chances, the AR has to delay raising the flag now to see if the attacker touches the ball (offside) or interferes with an opponent (offside) or if a defender deliberately plays the ball first instead (not offside) or if the ball goes untouched over the goal line (not offside), etc., before the flag should be raised. Consequently, with this delay, I am raising the flag for offside a good deal less often than years ago.

Also, the AR needs to continue his/her run and not stop, as in the past, when the attacker is offside, as the indirect kick is now taken where the attacker became involved in the play.

The ref said to me after the game that he could tell when the ball was passed that the attacker was in an offside position.

So the attacker runs on to the ball and his first touch is an angled shot from eight yards, which is when I raised the flag. The ref blew his whistle as the ball entered the goal. All these complaints from maroon as the offside decision determined the outcome of the game so I wish there was a video as they could have clearly seen the player was offside. 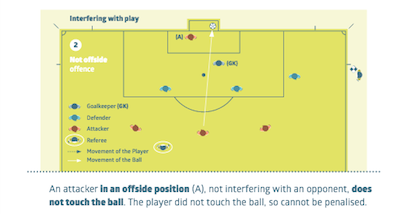 Law 11 on offside is soccer’s only complex rule and it has become more complicated of late as the AR must delay raising the flag as many things could occur before the attacker in an offside position becomes involved in the play. He becomes involved by interfering with play (touching the ball), or interfering with an opponent (such as challenging for the ball with a defender right there or being in the visual path of the goalkeeper when a shot is taken), or gaining an advantage (the attacker is in an offside position when a teammate takes a shot and the ball rebounds off the crossbar or upright to that attacker or comes to the attacker from a deliberate save). The only time with the offside decision that the flag should be raised quickly is if the attacker in an offside position could collide with the opposing team’s keeper.

A typical scenario for dissent is the attacker is in an offside position at the time the ball is played. I run and a few seconds later, I raise my flag when the attacker touches the ball. The dissent often is “Offside is determined when the ball is passed,” and “The flag was late,” both of which I heard in that high school game.

So some officials are resistant and want to raise the flag earlier, as in the past. Others have not gotten into the habit yet of running, instead of stopping, with the player in an offside position not yet becoming involved in active play.

The ref correctly gave the indirect kick for offside in the defensive half of the field where he played the ball. We explained why and the teams seemed to accept our explanation although a few players might have thought the officials were a little crazy.