Atlanta United, best MLS expansion team ever? Not so fast

Atlanta United is on course to set an attendance record in its first MLS season and is playing some of the best soccer ever seen in the league. But how does it rank among expansion teams?

With the additions of Minnesota United and Atlanta United, MLS has grown by 15 teams since the first expansion of 1998. That year, a new team in Chicago led by a Princeton grad and ex-assistant coach named Bob Bradley guided the Fire to an incredible double of MLS Cup and U.S. Open Cup.

Since then, no newbie has come close to winning the league title, though the fledgling Sounders established their street cred by claiming the 2009 Open Cup in their first season. They set the bar for expansion teams very high in that first season and not until 2017 did a strong challenger emerge.

Spectacular success on the field and at the gate this season has many observers proclaiming  Atlanta United as the top expansion team of all time, an assertion rebuked by Bradley last week, and rightly so. AUFC might be the most fun team to watch in league history – and if not No. 1, certainly at least in the top five – but until the playoffs play out a valid comparison in competitive terms can’t be made. 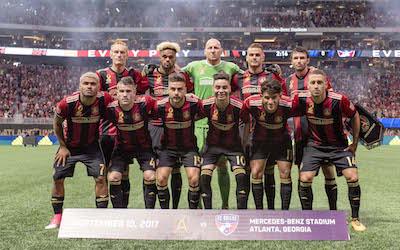 At this juncture, however, a look at how all those 15 teams have fared in their expansion seasons does certify the Atlanta accomplishment as remarkable even when its league-leading, record-bound average attendance of 47,239 is set aside.

Note: Rank is a team’s standing based on overall record.
*Records of Miami and Chicago are  adjusted for result after 90 minutes. MLS dropped shootout after the 1999 season.

Just getting into the playoffs, which Atlanta United is on the brink of accomplishing, pushes the Five Stripes ahead of 10 predecessors along with fellow debutant Minnesota United, which is technically still the hunt but destined to fall short.

Still, as the chart shows, the Loons have done pretty well in terms of wins though they are also destined to finish near the bottom in the overall rankings, which most expansion teams have done. Four times a new team has posted the league’s worst record and only the ineptitude of expansion companion Chivas USA kept Real Salt Lake off the bottom when those teams joined MLS in 2005.

Since those dire days, the procession of expansion teams has steadily pushed the envelope on and off the field. Not every new team has jumped into the league with its own stadium and ambitious ownership and lots of victories but that is the general trend. Five years after winning just five games, RSL had its own stadium and a league championship.

When he agreed to fund the Sounders entry into MLS as its primary investor, entertainment mogul Joe Roth boldly proclaimed that he expected them to win from the get-go and hired head coach Sigi Schmid, who had just won his second MLS Cup with Columbus. Schmid led the Sounders to four MLS Cups and laid the groundwork for a first MLS Cup title they won last year.

In 2011, the dual entries of Portland and Vancouver brought the Cascadia Cup into the modern soccer consciousness. A year later, bold and brash Canadian businessman Joey Saputo and Montreal Impact escalated tensions in the Eastern Conference in general and eastern Canada in particular. After an expansion lull -- by league standards -- in 2015 MLS returned to Florida by promoting Orlando City from USL and adding a rival in New York for the Red Bulls.

The debate regarding Atlanta United as the best or most successful or most whatever team in league history won’t be settled by its playoff fate. Comparisons with the Fire in its expansion season take you back two full decades, to a starkly different soccer world and American landscape.

With just 12 teams and schedule of 32 games, many of them decided by a gimmick dreamed up by American entrepreneurs two decades previous, MLS wasn’t anything like what it is today. (For the record, the Fire competed in just three games that went to the shootout and won two of them.)

Still, it’s notable that next year’s startup team, Los Angeles Football Club, has brought back Bradley to MLS for its launch. The incredible work of head coach Gerardo "Tata" Martino and his staff, technical director Carlos Bocanegra, president Darren Eales, and the AUFC organization has no doubt generated more sizzle than any team in league history, and has made the 2017 MLS season one of its most memorable.