Had the USA managed even a point against Costa Rica in its last Hexagonal home game, the general feeling heading into the next one, against Panama in Orlando on Friday, would be at the worst cautious optimism.

Instead, the 2-0 loss to Costa Rica and subsequent 1-1 tie in Honduras has sewn severe anxiety amongst the U.S. fan base and ratcheted up hopes in Panama, which has never qualified for a World Cup but currently sits third in the Hexagonal with a 2-2-4 (W-L-T) record and 10 points, one more than the Americans.

Panama started off the Hexagonal in November of last year by stunning Honduras, 1-0, in San Pedro Sula with a goal by Red Bulls defender Fidel Escobar. It has also carved out a 0-0 tie away to Costa Rica, yet strangely, has won only one of four home qualifiers: a 3-0 rout of Trinidad and Tobago Sept. 5. But those four points on the road give it ample reason to believe that it can get something out of its trip to Florida.

“We have to be focused, with zero errors, and for everyone on the field to be together and well compact,” said midfielder Anibal Godoy,who is prone to careless fouls but can hit mid-range and long-distance passes of extreme accuracy. “[We are going] to try to do what we have been doing when we play away.” 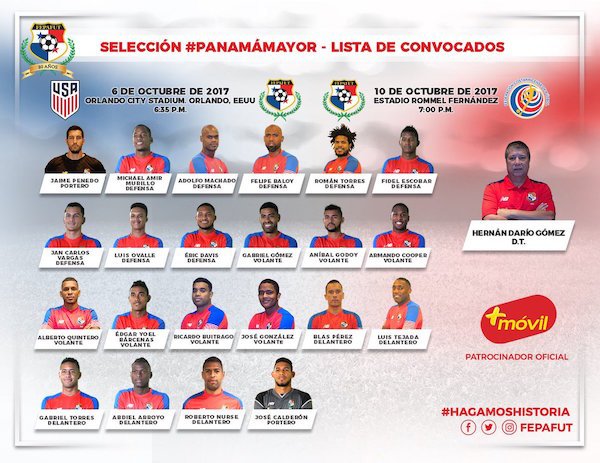 MLS connections abound. Panama features MLS players, current and past, right down its spine. Ex-Galaxy keeper Jaime Penedo is first-choice in goal, Escobar and Ramon Torres often start as the centerback pairing, and Quakes midfielder Godoy anchors the middle. Blas Perez (formerly of FC Dallas and Vancouver) is among the options on the front line.

The Americans must be wary forwards  Gabriel Torres and Luis Tejada, who are both among the craftiest and most dangerous forwards in Concacaf. Midfielder Alberto Quintero scorched U.S. right back Graham Zusi several times when the nations met last March in Panama City. Late in the first half, Quintero earned a free kick that led to a corner kick, from which Gabriel Gomez scored to match a Clint Dempsey goal notched four minutes earlier.

De Andre Yedlin will start at right back in place of Zusi, but several times during the Hexagonal Quintero has lined up on the opposite side. In the 3-0 defeat of T&T, a Quintero cross wound up in the net off defender Carlyle Mitchell for the second goal.

Quintero has MLS ties as well, scoring three goals and earning four assists while playing 30 games on loan to San Jose last year. Keeping track of Quintero while maintaining a defensive shape will be among the vital issues for the Americans regardless of formation and personnel.

Adding to the tactical puzzle for head coach Bruce Arena is the fact Panama has deployed both three-man and four-man back lines during the Hexagonal, and that six different players (along with Mitchell) have each scored one goal. Los Canaleros are also dangerous on set plays, even those taken by the opposition, as Gabriel Torres demonstrated two months ago against T&T when he raced out of his own defensive third dribbling a cleared corner kick to score the first goal.

A Concacaf rival on the rise. Panama has already accrued the most Hexagonal points in its history after garnering eight points in 2013. It failed to reach the Hex in 2009, four years after finishing at the bottom of the 2005 edition with just two points and a goal difference of minus-17.

Panama can’t match the U.S. in talent, but about 13 years ago began its rise from Concacaf minnow to troublesome foe. In the semifinal round of qualifying for the 2006 World Cup only a very late and probably offside goal by Cobi Jones earned the U.S. a 1-1 tie in Panama City, and ever since then Panama has occasionally yet deservedly jarred the Americans off their stride.

2005 Gold Cup final. Panama slugs out a 0-0 tie in Giants Stadium that the USA wins on penalty kicks.

2011 Gold Cup group phase. Panama stuns the USA, 2-1, in Tampa. The Americans win a rematch in the semifinals, 1-0, but lose to Mexico, 4-2, in the final, after which head coach Bob Bradley is dismissed.

2013 Gold Cup final. Again the nations meet in the final and again the game is tight. Midfielder Stuart Holden goes off injured in the 23rd minute and not until substitute Brek Shea scores 42 seconds after his second-half entry does the USA earn a 1-0 win.

2015 Gold Cup group phase. The Americans are trailing early in the second half when midfielder Michael Bradley equalizes. The match ends, 1-1, but they are not so fortunate in the knockout rounds.

2015 Gold Cup third-place match. A stunning 2-1 loss to Jamaica drops the USA into the third-place match, which Panama wins on penalty kicks after a 1-1 tie. The fourth-place finish is the worst for the USA since a quarterfinal elimination in the 2000 competition.

2017 Hexagonal. Both teams score first-half goals in Panama City and the Americans hang on for a 1-1 tie despite being outshot, 9-3.

2017 Gold Cup group phase. In Nashville, Dom Dwyer scores his first goal for the U.S. in a competitive match five minutes into the second half, but Miguel Camargo equalizes 10 minutes later. The match ends, 1-1, and Panama eventually finishes group play tied with the USA for first place. Los Canaleros fall to Costa Rica, 1-0, in the quarterfinals and the Americans march to the title.

Most of Panama’s good results against the U.S. have come in the Gold Cup, yet those games are always on American soil and thus familiar ground, literally, to the Panamanian players.

Panama is also not as talented as Costa Rica, but both nations have a lot of national-teamers rostered by MLS clubs and thus American fans can be concerned that a manager as sharp as Hernan Gomez can parlay that knowledge into his game plan.

Head coach is also a familiar foe. Gomez, a Colombian who has coached his national team as well as Guatemala and Ecuador, took over Panama in 2014 and masterminded those recent successes against the U.S. (He also guided Guatemala into the quarterfinals of the 2007 Gold Cup despite a narrow 1-0 loss to the U.S. in their group opener.)

In its eight Hexagonal matches, Panama has conceded just five goals – compared to 11 allowed by the U.S. -- and by getting a tie can keep the Americans behind it heading into a home game on the final day against Costa Rica, which should clinch a spot in Russia Saturday against Honduras.

Only by winning can the USA keep control of a possible third-place finish. A tie would leave it dependent on the result next week against T&T as well outcomes of the other two games. If it loses it can’t finish higher than fourth and could need some help just to reach the final qualifying series against the winner of the Syria-Australia Asian playoff. (Those nations tied, 1-1, Thursday in the first leg.)

Panama will take the field Friday knowing it clinches its first-ever World Cup spot if it wins and Honduras loses in Costa Rica on Saturday.  (A Panama win and Honduras tie would all but mathematically send Panama through.) Yet even a tie keeps the U.S. at bay and puts everything on the line when one of the most dramatic Hexagonals ever contested comes to a close Tuesday.

“We know that we can make history,” said midfielder Edgar Yoel Barcenas, who often takes the opposite flank to that of Quintero. “We talk a lot among ourselves and that’s how we see it. We can do things well and reach a first World Cup, which is what we all want.
“We are focused and motivated. Here, in the United States, is the chance, but we cannot go out hurried. We have to be intelligent and read the match situation.”