The USA opened the 2017 U-17 World Cup against one of the least formidable teams in the tournament: India, which is making its first World Cup appearance at any level. However, U.S. coach John Hackworth  was correct when he warned that opening against a pumped up home team in front of a fervent crowd could create a challenging game for the USA.

Indeed, more than 46,000 fans filled the Jawaharal Nehru Stadium in New Dehli on Friday and the USA played nervously for much of the first half, but came away with a satisfactory 3-0 win.

Josh Sargent opens his account
Josh Sargent, the 17-year-old Silver Boot winner at the U-20 World Cup started his campaign to claim the Golden Boot at this U-17 World Cup with a goal from the penalty spot. Referee Gery Vargas awarded the penalty kick on Jitendra Singh for grabbing Sargent, who had dribbled past Singh.

Sargent's low shot into the left corner gave the USA a 1-0 lead after a half hour of struggling to penetrate the packed India defense. Blaine Ferri in the sixth minute had squandered the best early U.S. chance when he shot straight into chest of keeper Dheeraj Moirangthem.

Hackworth started four forwards, Sargent, Timothy Weah, Ayo Akinola and Andrew Carleton, with Carleton playing an attacking midfield role. But too often U.S. passes missed their target as the Americans' performance was largely incohesive until the second half after Chris Durkin gave the USA a 2-0 lead with an 11-yard shot after a corner kick clearance in the 51sth minute.

Andrew Carleton scores a key goal
India is likely to lose all three games of its group games, so padding its goal difference against the weakest Group A opponent was a key aim for the USA. In the 58th minute, Carleton delivered a precise through ball to set up Akinola with a one-on-one against keeper Moirangthem. Akinola's attempt to chip the keeper failed miserably, squandering a chance that would have likely hastened India's collapse. 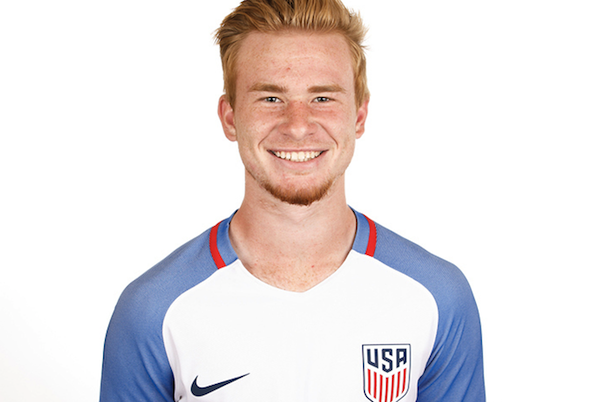 In the 84th minute, Carleton demonstrated how to finish such an opportunity. George Acosta, who replaced Akinola in the 66th minute, delivered the perfectly weighted through ball and Carleton rounded the keeper and shot low into the net.

Carleton's goal came after India's best chance of the day, a shot off the crossbar by Ali Anwar that resulted in a rare counterattack opportunity for the USA that it did not waste. 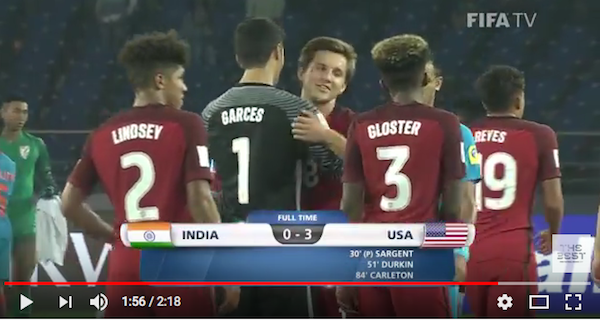 Next, a much tougher challenge
The three-goal win puts the USA in first place of Group A, thanks to a superior goal difference to Ghana, which early in the day beat Colombia, 1-0, on a 39th-minute goal by Sadiq Ibrahim. Ghana, which outshot Colombia 17-15, entered the tournament as runner-up to Mali at the 2017 Africa U-17 Cup of Nations. The USA meets Ghana on Monday, 7:30 a.m ET (FS2 & Universo).

TRIVIA: Josh Sargent became the second player in U.S. history to play in the U-17 and U-20 World Cup in the same year, after Freddy Adu in 2003. Four months ago, Sargent scored four goals as the USA reached the quarterfinals U-20 World Cup.