In 1967, Clay Berling took his wife and six children to see the Oakland Clippers play because the soccer game presented the only affordable opportunity to bring his entire family to the Oakland Coliseum, which had been constructed the year before. He fell in love with soccer on that day.

For less than $10, Berling and his family watched the Clippers in action in the National Professional Soccer League, which later merged with the United Soccer Association to create the NASL. He left impressed with the skills and teamwork, saw what he believed was a perfect sport for children, and immediately got involved in Northern California youth and adult soccer, serving in a variety of capacities including league commissioner.

Hungry for soccer news but unable to find it, Berling launched a biweekly newsletter called Soccer West that quickly went national and was renamed Soccer America in 1972 and became a weekly magazine. 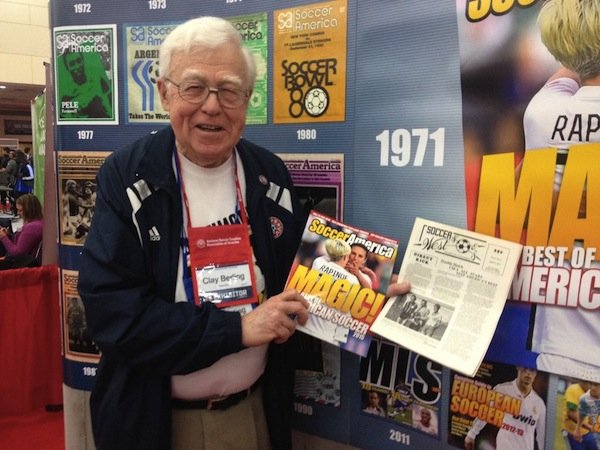 In the early days, the magazine was laid out on Berling's kitchen table, on the desk of his State Farm Insurance office, and in a Sunday school room rented from the United Methodist Church near the Berlings' home in Albany, California.

Later, Soccer America grew to 23 full-time employees and moved to offices in Berkeley, California, and his daughter Lynn Berling-Manuel, currently the CEO of United Soccer Coaches (formerly known as the NSCAA), served as editor-in-chief and publisher. His daughter, Janet Ceja-Orozco, also served at Soccer America in the fulfillment department. Their mother, Ruth Berling, was Clay's partner in the venture and worked in the production department until her death in 1991.

In 2003, Soccer America Magazine made The Chicago Tribune's list of  "The 50 Best Magazines."

In 1997, when Clay Berling was given the NSCAA Honor Award, master of ceremonies Cliff McCrath said: "Clay Berling is not a player, is not a coach, is not a referee. He has no wins no losses and no ties to his credit. But then again, perhaps he has more wins, ties, losses and records than all the coaches and players in the game. Because without Soccer America, we wouldn't really know about each other. We wouldn't be as aware of wins and losses and strategies and coaches-of-the-year and records and where and how our game fits in with the rest of the world."

Clay Berling was born on Nov. 25, 1930 in Escalon, Calif., and grew up in San Francisco. He attended San Francisco City College before transferring to UC Berkeley, graduating in 1952, the year in which Clay and Ruth got married. Drafted by the U.S. Army, he served two years in Germany, where their first child, Lynn, was born.

Upon leaving the military, Clay and Ruth moved to Albany, California. Clay served as a chemistry instructor at Oakland City College. In 1961, he joined the State Farm Insurance Company and launched an agency, which he operated until his retirement.

Berling kept Soccer America going during the sport's lean years following the demise of the NASL after the 1985 season and he never stopped believing that the sport would attain mainstream popularity in the USA. He attended first Women's World Cup in China in 1991, the second in Sweden in 1995, and in a 1999 interview, after the USA won the Women's World Cup final that was watched by 40 million on ABC, Berling said:

"I'll never forget being in the Rose Bowl with 90,000 fans watching the U.S. women win the World Cup. It brought women's sports to a level we'd never seen. And it also influenced the rest of the world. Countries that hadn't shown respect for the women's game began taking it seriously."

Of MLS, which launched in 1996, Berling said in 1999: "MLS is the best thing that ever happened to American talent and it shows in every way. If U.S. soccer fans want to see this country produce the best soccer it can, then they had better support MLS."

While in retirement in Carmel-by-the-Sea, Calif., Berling continued to follow the sport daily, and he continued to attend the annual United Soccer Coaches Convention, where he would greet readers and the great many friends he had made in the soccer world, at the Soccer America booth. But poor health prevented him from attending last January's convention.

Memorial service information will be announced in the coming days.