USA beats Ghana for superb start to U-17 World Cup

The USA is off to its best start at the biennial U-17 World Cup since 2005. On Monday, Ayo Akinola  scored in the 75th minute to give the USA a 1-0 win following its 3-0 win in the opener against host India on Friday.

Ayo Akinola turns hero
After disappointing by squandering a breakaway in the USA’s win over India, Ayo Akinola came off the bench against Ghana in the 63rd minute and scored the gamewinner 12 minutes later.

Chris Durkin won the ball on the left side of the Ghana half and passed to Chris Goslin, who had come sprinting down the middle. Goslin passed it to Akinola, who fended off a challenge from Rashid Alhassan before stroking home from the outside the corner of the goal area.

The best previous U.S. chances had come from left-footed long-range shots from Blaine Ferri that flew just wide and a flurry in the 16th minute that included an off-target header by James Sands and chested ball by Josh Sargent that bounced off the ground and was swatted away goalkeeper Danlad Ibrahim near the crossbar.

Durkin contributed crucially on both ends. In the 47th minute, while on the ground, he blocked a three-yard shot by Sadiq Ibrahim. 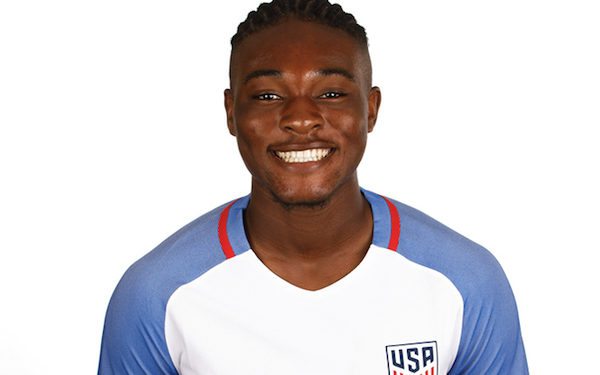 Patience pays off
The USA spent much of first half stringing passes together, patiently searching for cracks in the Ghana defense. The Americans didn’t penetrate often, but the tactic stifled what can an explosive Ghana offense.

Ghana, however, threatened more frequently in the second half, especially down the right wing. U.S. keeper Justin Garces blocked with his hand a close-range shot from Kudus Mohammed and Emmanuel Toku should have buried a 10-yard shot that he hit high.

The USA had a one-man advantage for the final 10 minutes because Ghana had used its subs when Abdul Yusif had to be stretched off with a head injury after clashing into Sargent. Akinola had the last big chance of the game, when he struck too high from 13 yards in the first of six minutes of stoppage time. 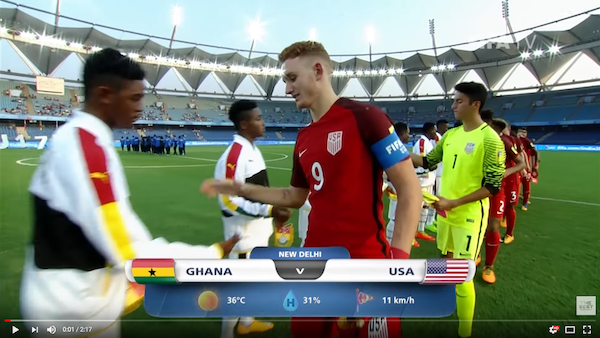 A superb start for the USA
Six points after two games assures the USA passage into the second round as four of six groups' third-place finishers advance along with the top two group finishers.

The win over Ghana keeps the USA in first place of Group A and the Americans have the best goal difference, plus 4. Ghana came into the U.S. game after beating Colombia, 1-0. The Colombians beat India, 2-1 on Friday.

The last time the USA started the U-17 World Cup with two victories came in 2005 in Peru, with wins over North Korea (3-2) and Italy (3-1), before a 1-1 tie with Ivory Coast and a 2-0 loss to the Netherlands. The run to the quarterfinals came during current coach John Hackworth’s first stint as U-17 head coach. The USA last reached the second round of a U-17 World Cup in 2011 and last won a knockout stage game in 1999, when it went on to finish fourth.