It’s time to put down once and for all the grand misconception that MLS is obligated to develop players for the U.S. national team.

Every facet of the game in this country is coming under fire in the wake of a 2-1 loss in Couva Tuesday night that knocked the U.S. out of contention for the 2018 World Cup. Of the 14 players in that match, nine are currently employed by MLS teams, and three others – defenders Omar Gonzalez, Jose Villafana and DeAndre Yedlin – started their careers in MLS before joining teams overseas. Only forwards Bobby Wood – a native of Hawaii who has played his entire pro career in Germany – and Christian Pulisic have no ties to MLS.

Thus, MLS is a convenient target, and of course is being blamed for the lackadaisical showings in Couva and against Costa Rica in Orlando last month.  But if MLS is of such poor quality, how can Costa Rica, Honduras and Panama -- which all finished ahead of the U.S. in the Hexagonal -- succeed with many league representatives in their lineups?

The answer is that the respective head coaches did an excellent job melding the MLS players with the others at their disposal, and the players themselves brought their full focus and intensity to the task at hand. Head coach Bruce Arena and his players, as he said, did not do their jobs.

The case of Bradley and Toronto FC. To that point, how can midfielder Michael Bradley, in particular, look so good for the dominant team in MLS, Toronto FC, and so clueless against Trinidad and Tobago? The easy answer, of course, is that MLS is crap, but TFC certainly isn’t and if it played T&T would probably win.

The harder answer is that Bradley steps up his game playing alongside Sebastian Giovinco and Victor Vasquez and against Sebastian Schweinsteiger or Ignacio Piatti. It’s not that Bradley can’t play well for the USA, the puzzler is that he – and too many teammates – can’t do it game in and game out. The dropoff in sharpness, both mentally and physically, from the pounding of Panama to the catastrophe in Couva defies simple explanation. 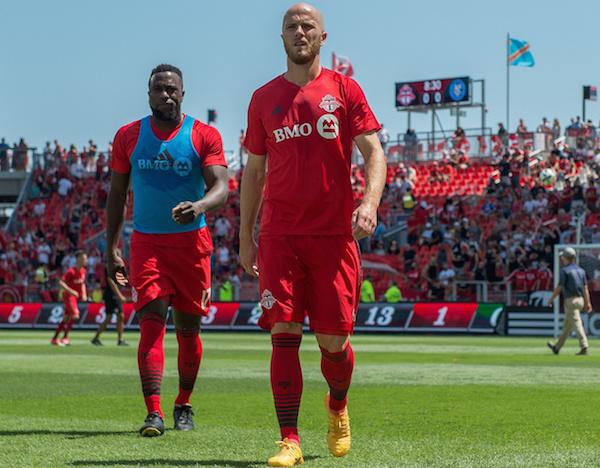 The fault is partly Bradley’s, but the environments in which he plays must take some blame as well. At 30, he should be under pressure for both TFC and the USA to keep his spot. TFC has several younger midfielders it can utilize if Bradley is suspended, away on international duty, or injured. For Arena, the choices are very limited.

Kellyn Acosta is a MLS Homegrown success story; an FC Dallas academy product who deservedly turns out regularly for the first team. But that didn’t stop FCD from signing a young Ecuadorean, Carlos Gruezo, who also plays central midfield. FCD has struggled this season and so has the 22-year-old Acosta, who didn’t excel as a U.S. starter last summer in the Gold Cup.

Losses were caused by bad plays across the board. Breaking down the defeats to Costa Rica and Trinidad & Tobago doesn’t square up MLS in the crosshairs. Across the board, the Americans faltered at the critical moments.

The first Costa Rican goal resulted from keeper Tim Howard (Colorado) taking a long goal kick rather than play it to either of his centerbacks, Tim Ream (Fulham) and Geoff Cameron (Stoke City), who were spread wide about 30 yards apart. They were in the right spots to avoid Costa Rican forward Marco Urena had he chosen to challenge either one of them for a ball arriving from Howard on a short goal kick, but out of position in case Costa Rica won possession back on a long kick and struck quickly down the middle. Which it did.

Howard rightly took blame for poor positioning on Urena's shot but with the centerbacks stationed where they were hitting a long kick made no sense tactically.

A scuffed pass by Cameron produced the second Costa Rican goal. What was he doing? Either he mishit the ball completely (error of technique) or didn’t see Costa Rican midfielder Daniel Guzman (error of perception). Either way it’s an egregious mistake and well exploited by the Timbers midfielder and Quakes forward.

During his days with the Galaxy, Gonzalez occasionally took criticism for “switching off,” probably the favorite soccer term to describe a brain freeze. The botched clearance by which he scored an own goal Tuesday was certainly a bit of bad luck but he wasn’t being jammed or charged by an opponent; he simply hit a slice that can only be blamed on sloppiness. It can’t be that hard to focus on a bouncing ball and put enough of your foot through it to drive it over the sideline.

A wonder goal by Alvin Jones might not have happened had Darlington Nagbe been able to get some pressure on Jones as he strolled up the flank. Nagbe had slid much too far inside to lend attacking support and thus had about 40 yards to cover when the ball was played wide to Jones. Apparently, nobody spotted the danger and sounded the alarm to get Nagbe into position.

The worst of many bad moments might have transpired when another long knuckler from Jones rebounded off Howard’s chest about 20 yards from goal and he had to chase down the loose ball himself. None of his teammates got anywhere near the ball the keeper knocked out for a corner kick.

Entering as a second-half sub, Clint Dempsey -- whose career has taken him from MLS to the Premier League and back -- livened up the attack and after forcing a save with a good shot hit the post on a bouncing shot. His energy and desire might have better served the U.S. as a starter, even if he couldn’t last the full 90 minutes, but Arena chose to start the same XI that had destroyed Panama.

Too many international slots?
Advocates of promotion-relegation for MLS will bang the drum loudly in their corner but the problem goes much deeper. If the league, and by association U.S. Soccer, can be blamed in any regard it is the liberal allotment of foreign player slots (eight per team, and 176 league-wide for the 2017 season) and reduced salary-budget charges for young Designated Players, of which international players are preferred.

Cranking out U-17s and U-20s and U-23s and full internationals who wear the red, white and blue is all well and good, but as a league in the global game, MLS is about finding and developing talented players who can win games and/or be eventually sold at a solid price. While several teams such as FC Dallas, the LA Galaxy and New York Red Bulls and Real Salt Lake have pushed fair numbers through their academies to the first team, there’s also a good market for young international players. At RSL, U.S. defender Justen Glad and Venezeulan attacker Jefferson Savarino are both 20 and important contributors. Teammate Joao Plata arrived in MLS on loan from LDU Quito in 2011 when he was 19.

The international-player limit is subject to the approval of the U.S. Soccer Board of Directors and as the league continues to expand, it might be time to reduce the international slots, which can be used in transactions. Another option is to mandate playing time for younger players but by law the league could not specify the nationality of such requirements.

MLS commissioner Don Garber and U.S. Soccer president Sunil Gulati have formed a friendship as well as a sound business partnership. But the goals and objectives of their respective organizations are not the same.

The discussion of balance between the native talent and foreign legion will always clash when quality of play is weighed against American representation. In the days of the old NASL, many head coaches -- very few of whom were American -- objected to a mandate they had to have at least two or three, depending on the rules in force for a particular season, North Americans on the field at all times.

(Actually, the rule was worded in reverse, along the lines of a team can have no more than nine non-North Americans on the field, so if a team had a North American sent off or had to leave injured with no subs available, it would not violate the rule. It was dubbed the “Non-American Soccer League” by a few critics.)

MLS initiated its Homegrown Player program in 2006, and four years ago mandated that all of its teams field boys’ squads at the U-14, U-16, and U-18 levels to play in the U.S. Soccer Development Academy. It will take a few more years to evaluate how well the academy system is working and many teams must simply accept the fact that a lot of players are choosing college rather than a pro contract at age 18. MLS must also face the fact that academy products such as FCD graduates Emerson Hyndman (Bournemouth) and Weston McKennie (Schalke 04) may take the foreign route.