After starting the U-17 World Cup with two wins that clinched second-round passage, the USA fell, 3-1, to Colombia. A costly defeat, as it dropped the USA from first place in Group A to third place, which likely means a more formidable round-of-16 opponent and one or two days less rest before its next game.

A bad start, fleeting recovery
Colombia took a 1-0 lead in the 3rd minute on flukish goal that started with Andres Cifuentes’ long throw-in. It flew over the aerial battle between Josh Sargent and Guillermo Tegue, and bounced right in front of and past Chris Durkin. While Jaylin Lindsey challenged futilely, Leandro Campaz appeared to knock the ball on with his back or arm before Juan Vidal pounced to strike from three yards past goalkeeper Justin Garces, who had stayed on his line.

The USA played its best soccer of the game for next 20 minutes and equalized in the 24th minute. Jorge Acosta with one touch slammed home an 11-yard shot after Andrew Carleton beat two Colombians and delivered a low pass across the penalty area. From then on, however, the Colombians played more swiftly and more effectively. 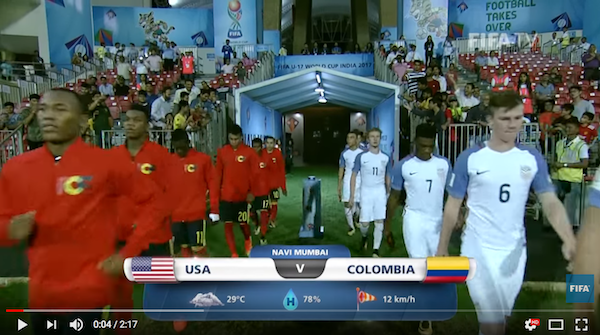 Defensive lapses
In addition to the inability of a crowd of U.S. players to cope with the long throw-in that led to the first Colombian goal, reckless defending led to Colombia’s go-ahead goal, a Juan Penaloza free kick that was awarded after Jaylin Lindsey and Sergino Dest clashed into Etilso Martinez on both sides. On the Colombia’s third goal, the strike that relegated the USA to a third-place finish, Penaloza hit a low pass that three U.S. defenders failed to interfere with on its way to a completely unmarked Deiber Caicedo the corner of the goal area for a close-range shot into the net.

The big difference
Striking was that when the Colombians had the ball they were able evade U.S. pressure with precise, quick short passes. The U.S. players struggled in the crowded areas of the field. Only with the Colombians surging in hope of bettering their goal difference, did the U.S. threaten, with counterattacks. The USA nearly got the goal that would have moved it into second place, but Tim Weah shot high and Ayo Akinola took a bad touch when Weah served him up yards from goal.

Josh Sargent’s struggles
The Silver Boot winner at the U-20 World Cup has scored only once in the three games, converting a penalty kick in the opening 3-0 win over India. His best chance in the 1-0 win over Ghana came when his chested ball was saved. Sargent was unable to shed his Colombian markers and didn’t get the service needed to unleash his usually lethal shots.

U.S. coach John Hackworth said:
“I give a tremendous amount of credit to Colombia because I thought they came out in the second half and played very well. And they pressed hard. We didn’t handle that particularly great. But we got it going, and then we gave up two goals that had nothing to do with their press and nothing to do with us playing out of the back.

“I thought you had two teams that play a similar style, that are both aggressive on both sides of the ball. And honestly I think in transition was where this game was won and lost. I think we are a good team in transition. We just didn’t have those moments tonight. We’re in a bad spot now because if we scored on one of the chances we had at the end there, we’re sitting in a different place.”

• Depending on the results of the final games in other groups, the USA will face either Group B winner Paraguay on Monday or the Group C winner on Tuesday. Paraguay has beaten 2015 runner-up Mali (3-2), New Zealand (4-2) and Turkey (3-1). Iran currently leads Group C after wins of Guinea (3-1) and Germany (4-0).