The USA's quest to reach the U-17 World Cup semifinals for the first time since 1999 ended with a 4-1 quarterfinal loss to England, which had a 2-0 lead by the 14th minute and was up 3-0 before the Josh Sargent  put the Americans on the scoreboard in the 72nd minute.

The poor start
The USA did not carry over any momentum from its 5-0 round of 16 win over Paraguay into the quarterfinal against England. In the 11th minute, Philip Foden evaded Taylor Booth and Chris Gloster on the right flank and hit a cross past Chris Durkin that U.S. keeper Justin Garces punched onto the foot of Rhian Brewster for a one-touch finish. Four minutes later, Foden again exploited the right flank and fed Brewster for the second goal of a hat trick he would complete with a stoppage-time penalty kick. 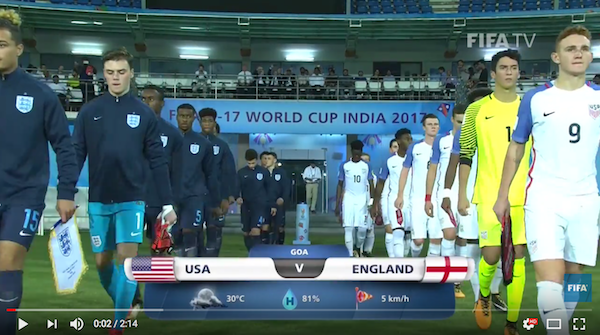 The failed comeback
The game was pretty much decided when a stretch of sparkling play by the USA in the middle of the first half failed to produce a goal. Tim Weah, the hat-trick hero from the Paraguay win, shot wide from 14 yards despite having time and space after dodging two England defenders. Within the next two minutes, Ayo Akinola shot way wide from 11 yards, Booth missed from long range and Josh Sargent hit the crossbar following a corner kick. In the 32nd minute, Blaine Ferri's left-footed shot went wide. After a 10-pass sequence that included goalkeeper Garces, Booth was denied by England keeper Curtis Anderson, who also a saved an eight-yard Akinola shot. Sargent shot high from 11 yards in the 40th minute.

The sad ending
Sargent's goal in the 72nd minute came when England was already up 3-0. Late in stoppage time, Sergino Dest was ejected for fouling Brewster on a breakaway and Brewster buried the penalty kick.

U.S. coach John Hackworth said:
"I thought we played some really good football over the course of this tournament. We came up against in my mind one off the best teams in the world tonight. I thought we had moments tonight that were exceptional play. At the same time, the goalkeeper for England was up to the task, made some fantastic saves in the first half that kept them in it. But we also didn’t start the game in the right way. …

“I don’t think you ever get better at anything without having some setbacks. Anytime you have moments like this experience, you have a choice. You can learn from it, and if you don’t, that’s the worst thing you can do. So my message to the team will be, look, we have to do things better. They had to come out with a different mentality at the start of this game. …

“I thought our team was ready for the challenge but in the first 20 minutes we were so tentative in simple situations. You can’t do that against a quality team with players of that caliber. After that, we woke up and played some good soccer. If we got one goal when it was two-nothing, I think it would have been a totally different game.”

TRIVIA: Josh Sargent’s goal was his third of the tournament, to go with four he scored earlier this year at the U-20 World Cup. His seven goals tie Freddy Adu (four at the 2003 U-17 World Cup and three at the 2007 U-20 World Cup) for the most goals by a U.S. player in youth World Cups.