Charlotte won't be in a position to compete for one of the two MLS expansion berths the league is expected to award in mid-December.

James Mitchell, the chairman of the City of Charlotte’s economic development committee, told the Charlotte Observer that an agreement won't be possible by the league's deadline.

Of the 12 expansion candidates, Charlotte was one of the first out of the gate in terms of making progress on a stadium project, but that momentum on a public-private partnership with the City of Charlotte and Mecklenburg County stalled.

Charlotte Motor Speedway CEO Marcus Smith wanted to build a soccer stadium at the site of old American Legion Memorial Stadium (Rodney Marsh's stomping grounds with the ASL Carolina Lightnin'). The MLS group in Charlotte would have contributed half the cost of the $175 million stadium and the other half would have come from Mecklenburg County and Charlotte. 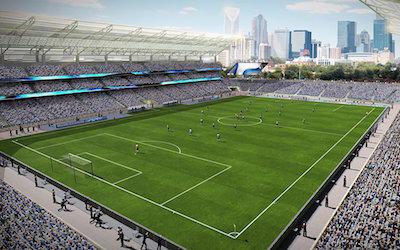 In January, Mecklenburg County commissioners voted, 5-3, in favor of a preliminary plan to contribute the county's $43.75 million share toward the stadium and front $75 million of the Smiths’ $87.5 million half (repayable over 25 years), but Charlotte's city council canceled plans for a vote, insisting it would not be rushed into making a commitment.

Without the support from Charlotte, Mecklenburg County commissioners pulled out of the stadium deal in August and announced they were reallocating the money they intended to spend on the stadium for parks.

-- Control of the city-owned Memorial Stadium site;
-- City council elections in November that made a stadium project impossible to support;
-- Progress in Nashville on its $250 million MLS project with funding levels Mitchell termed "just unbelievable."