Brazil's impressive revival continues at the U-17 World Cup

Brazil, the world’s most successful soccer nation, hit rock bottom at the 2014 World Cup with a 7-1 loss to Germany. Its revival has been impressive and has also been on view at the U-17 World Cup. 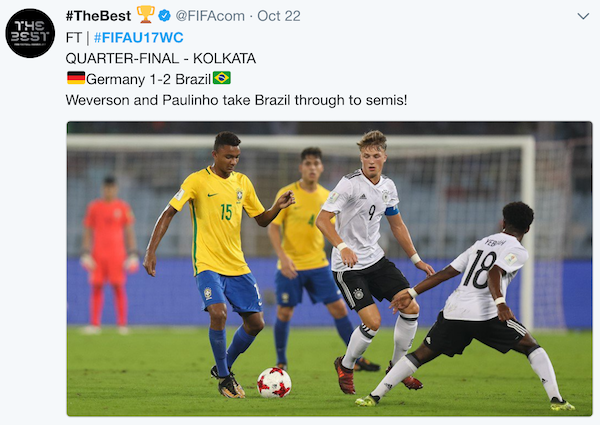 It wasn’t just the embarrassing defeat against the Germans in Belo Horizante that was so discouraging about the Brazil’s play at the World Cup on its home soil. You’ll remember the Brazilians were lucky to beat Chile, with a PK shootout, in the round of 16, and that its approach was more destructive than jogo bonito against the Chileans, Colombia and Mexico, whose Javier Hernandez was the victim of bone-crunching tackles when he came off the bench in the scoreless tie.

Two years after the World Cup, in the summer of 2016, Brazil hosted the Olympics and celebrated a gold medal in the men’s soccer tournament, a U-23 competition with three wild-card players per team -- one of which, Neymar, scored on a free kick and buried his spot kick in the gold-medal game victory over Germany.

But that same summer, at the 2016 Copa America Centenario in the USA, Brazil exited in the group stage, tying Honduras and losing to Peru.

Defensive-minded coach Dunga was fired and replaced by Tite, a longtime club coach most famous for his stint with Corinthians that included a Copa Libertadores and FIFA Club World Cup title.

With Tite at the helm, Brazil became the first team to win nine straight South American World Cup qualifiers. The Seleção clinched a spot at the 2018 World Cup four games to spare, becoming the first team besides host Russia to qualify.

Brazil finished the 10-team, 18-game qualifying competition in first place, with the most goals scored (41 for an average of 2.28 per game), fewest goals conceded (11) and fewest yellow cards.

“Tite arrived and made adjustments,” said Neymar. "The players are not really different -- it's the way of playing.”

A way of playing that looks more like the Brazil fans enjoy watching and its players delight in playing. That has also been on view at the U-17 World Cup, where the young Brazilians have reached the semifinals with five straight wins

The Brazilians face a formidable England that has reached the U-17 World Cup semifinals the first time, having beaten the USA, 4-1, in the quarterfinals. Brazil has won three U-17 World Cups, second to Nigeria's five, but last lifted the trophy in 2003.

Making this tournament for teens especially intriguing is all four of the semifinalists have been playing some sparkling soccer. The Wednesday morning games should be well worth watching.