Carlos Cordeiro: 'I have harbored ambitions for a long time'

In his almost 11 years with U.S. Soccer, beginning with his appointment as its first independent director, Carlos Cordeiro has risen up the ranks of the federation, serving as its treasurer and being elected as vice president in 2016.

Cordeiro has been viewed as a close adviser and confidant to current U.S. president Sunil Gulati, working closely with Gulati in international matters and taking on key committee roles himself at FIFA and Concacaf. He was viewed as a potential successor to Gulati as U.S. president, but that assumption was based on Gulati serving a final term that expired in 2022.

The USA's failure to qualify for the 2018 World Cup has overturned many assumptions about U.S. Soccer. Among them: Cordeiro would not enter the race for U.S. Soccer president, to be decided at U.S. Soccer's AGM in Orlando next February, if Gulati entered the race. Gulati has not yet announced his intentions either way, but in a surprise Cordeiro announced on Wednesday he is running for president.

Cordeiro, the former Goldman Sachs managing director, spoke with Soccer America on Wednesday night about his decision and his platform. 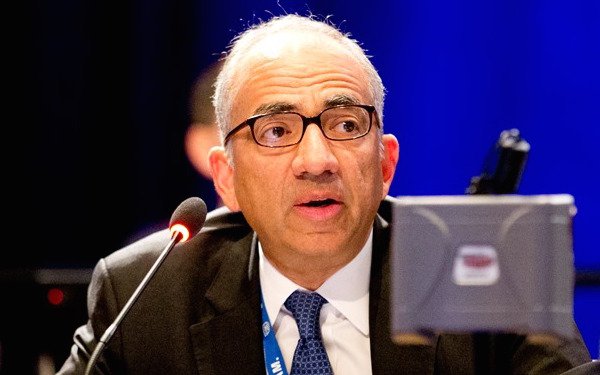 How long have you been thinking about running?

"I have harbored ambitions for a long time. I didn't become vice president by accident. I had thought about it when I ran for vice president in 2015. The election was in 2016. The final decision was made in the last few days. And just to be clear, it is not about the loss, not about Trinidad, not about not qualifying, as terrible as all that was and still is.

"My reasons for going are bigger, larger, longer-term, more strategic. Those were the reasons that were pushing me forward. I had been thinking about it for those reasons, but obviously a lot of the noise that has come from the loss got me think about it a lot more carefully in the last couple of weeks. If not, it's something that might have occurred in four years' time. But it's no question, I had been thinking about it for some time.

Would you have run if Sunil Gulati had announced he was running in recent weeks?

"My decision to run is independent of anyone else running. I know there are any number of people who have declared, there are a lot of rumors about who might be declaring and someone like Sunil who hasn't decided and is obviously thinking about it. My decision was independent of all that. We're at a critical juncture, we need new leadership, we need to be more open ... My reasons are my reasons, and not because someone else is running or not running."

Explain your Mission 26/27 platform for the national teams and hosting the 2026 and 2027 World Cups?

"Like anyone running, I want to have something to aspire to. Our women have been outstanding for more than a generation, who's kidding? We aspire to maintain our women at that level year in and year out. The point about 2027 was to say our women deserve a World Cup on our home turf. We did have it way back in 2003 but really the last one was more an accident because of SARS in China. That goes back a long time, and I don't include Canada [2015 World Cup] in all that."

"On the men's side, it goes without saying we have to and will qualify for 2022 [World Cup]. It's more than qualify. We have to do a lot better and aspire to be in that final group. We want to host 2026, and that is what the bid is all about. It encapsulates the excellence on the field as well as the opportunity to host both tournaments.

"To get to that result is not a matter of sitting back and doing nothing. We have a lot to do in the next decade to aspire not to just to host it but excel. That is at the heart of my vision statement. We've done a hell of a lot over the past 25-30 years and more so in the past decade, but I think we've reached a plateau. We really need to ramp it. The bar is set too low. Having a budget of $100 million -- yes, it's twice what it was eight years ago, or nine years ago. But that doesn't compare. If we want to compete with the Germans, the Spaniards, the French on the field -- and I am not talking about winning one of every 10 games, I am talking about competing with them every time out -- that will not get us there. We need significantly more resources. And what does that mean? Those resources need to trickle down to the grassroots because that is where everything starts.

"The mission is we want to get there to 2026 and 2027 but we're going to have to do a lot more work to grow the base of the pyramid if we are going to get there. My other thought was, we're a nation with a 330 million population, the largest, most developed, wealthiest. In the soccer world, we are not yet batting at that level. We have the most favorable demographics, historically lots of immigration, but we aren't playing at that level and we have to do a lot more at the grassroots to get there."

You are proposing for the president to have a more traditional role, like that of a chairman of the board, in contrast to Sunil's very hands-on style?

"I see the role of president of U.S. Soccer is more akin to the chairman of a board of directors. It's not an an executive role, it's not full-time. We are all volunteers, not paid. You can't confuse that with the role of a CEO, a paid executive. We happen to have a very good one [secretary general Dan Flynn] sitting in Chicago. To me there is a difference between chairing a board and running the entity day to day.

"What does the president -- chairman of the board -- do? The president and board through the president oversee the strategy of the federation. My approach will be a lot more open, more inclusive, more collaborative. We need to involve our staff more in these discussions. When decisions are made, the staff is there to implement them and we are there to monitor the progress. That's what the board should do.

"This is no longer a $20 million, $30 million, $40 million annual budget. This already at $100 million, $120 million. We have $140 million or whatever it is in the bank. And we're trying to figure out how to spend that. It's not a question of spending money, it's a question of investing money. You're investing for the long term so it has to be sustainable."

Some commentators say the federation should make the president a paid position and hire a general manager?

"There is a general lack of understanding. We have an awesome fan base across the country but with the advent of social media and the way information gets kicked around, there is a lot of misinformation out there. The president of soccer is not a full-time role. And we are one of several national governing bodies for sport sanctioned by the USOC under charge from the U.S. [government] and none of those presidents get paid. They are all volunteers like we are.

"All the sports -- track & field and swimming -- have executive directors, secretary generals, CEOs. They have full-time people and staff. The bigger guys have more people, like soccer does. There is a general misconception of a lot of people out there. The president of U.S. Soccer is a non-executive role, not a executive role."

You have worked alongside Sunil as a close adviser for many years. Many think the new boss will be the same as the old boss.

"I am a very independent-thinking in every respect. I have worked very hard in the 10 years I have been involved in soccer with U.S. Soccer. I came in as an independent director, to begin with. That was my appointment ratified by the Council. Yes, I had a successful  business career prior to that. Those learning blocks, as I call them, came in very useful in a soccer context. I took on the treasurer's role, I ran the budget and finance committee, I have done many things as a volunteer so much so that I decided to run for vice president. Here I am as vice president.

"As I have been doing that, I have been forming my own views about where we should go. It is unfortunate we had what happened last month. That bad event became sort of a lightning rod for other reasons. I have been thinking about this for a long time. To take the federation to the next level -- and it isn't about dollars and cents -- and compete with the Germanys -- and I use that as an example -- I think requires a whole different type of leadership. And that leadership is about reconciling differences, building consensus, insuring decisions are made transparently, engaging the board, and really leveraging the great people we have in Chicago who are our staff.

"This is not a comment about Sunil, please. It's too big a business, too big a federation. We have 150 people [on] staff. It is too big for any one person. And that's where I come in. It is someone at the top making sure that everyone is pulling together and it's a real team effort."

u.s. soccer
11 comments about "Carlos Cordeiro: 'I have harbored ambitions for a long time'".
Read more comments >
Next story loading