Less than a day after its request for a preliminary injunction to allow it to play as a Division 2 league in 2018 was rejected by the U.S. District Court, the NASL has filed a notice of appeal to the U.S. Court of Appeals for the Second Circuit.

NASL statement:
"We remain confident in the merits of our case and that our request for a preliminary injunction is supported by the law. For that reason, we're hopeful that the Second Circuit will deliver a ruling that allows the NASL to play at the Division 2 level in 2018 and enables us to continue growing and developing the sport. We have asked for our appeal to be expedited to eliminate the uncertainty facing all of our clubs, players, coaches, fans, and other stakeholders."

The appeal does have the effect, though, of clouding the picture -- what will be the exit fee? -- for NASL clubs wishing to depart the league.

In its statement on Saturday following the posting of Judge Margo Brodie's order, NASL referred to "the extreme harm this decision poses."

One of the two grounds for the granting of a mandatory injunction is "where extreme or very serious damage will result from a denial of preliminary relief." Judge Brodie declined the NASL's request to find that it would suffer “extreme” or “very serious damage" if it wasn't granted Division 2 sanctioning. Her decision in this footnote may be the basis of the NASL's appeal: 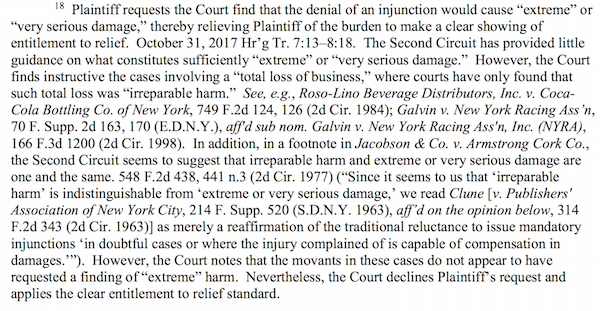