USA-Canada: Americans lucky to get out of BC Place with draw

The USA and Canada played to a 1-1 tie Thursday night in the first of two friendlies before a crowd of 28,017 fans, higher than that for any Whitecaps or BC Lions (CFL) game at Vancouver's BC Place in 2017.

1. Morgan is finishing the year on a high note.

Alex Morgan was rewarded for her energy in the first half when she put the USA ahead in the 31st minute with her 79th career goal and sixth goal of the year, all in the last six games.

Canada had three chances to clear the ball before Casey Short played a header into the penalty area, where Morgan nudged the ball forward through the tentative Canadian central defense and fired it past keeper Stephanie Labbe.

Seven minutes later, Morgan won a free kick 25 yards out on which Lindsey Horan forced Labbe into making a flying save to tip the ball over the goal.

2. Canadians assert themselves in the second half.

After the best chances in the first half fell to the USA -- Megan Rapinoe hit the post in the 11th minute -- Canada took the game to the USA and grew in confidence as it went on. It was finally rewarded in the 56th minute when first-half sub Adrianna Leon equalized.

Off a corner kick, Duke University's Rebecca Quinn fired a header that goalkeeper Alyssa Naeher couldn't punch out of danger. On the rebound, Quinn's curling shot hit the underside of the crossbar, and the ball came to Christine Sinclair, who looped it back to the far post where the open Leon put ball away.

Canada could have won the game in the 84th minute when American-born Maegan Kelly, playing her first game for Canada, hit the post with a shot she lofted over Naeher but the U.S. keeper just managed to get a fingertip on. 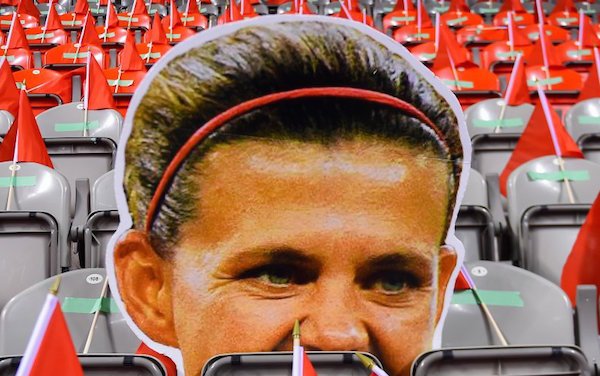 Afterward, Canada coach John Herdman said the U.S. would probably agree that they were lucky to get out of BC Place with a draw.

Alongside the eternal Sinclair (260 caps), Houston Dash teammates Janine Beckie and Nichelle Prince and Leon threatened throughout the second half as the Canada finished with a 19-11 edge in shots and forced Naeher into seven saves.

Herdman continues to add young talent to the Canadian team. Beckie is only 23, while Prince, Quinn and Ashley Lawrence, recalled from Paris St. Germain, are only 22.

Quinn was one of three U.S. collegians to start alongside teenagers Jessie Fleming (UCLA) and Deanne Rose (Florida), while Jordyn Huitema, only 16, came off the bench in the 90th minute to earn her fifth cap.

alex morgan
1 comment about "USA-Canada: Americans lucky to get out of BC Place with draw".
Next story loading