Expansion team San Francisco Deltas wrapped up a memorable season that might be its last by beating the New York Cosmos, 2-0, Sunday night in the NASL final.

Here are three takeaways from the match that could be the last ever played by the Deltas, who have lost millions of dollars in their first season and are not expected to return in 2018. 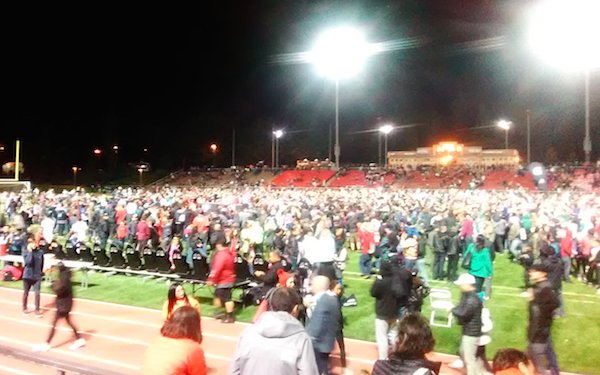 1. Third time is a charm for Dos Santos

With his third team in three years, Deltas head coach Marc Dos Santos steered his team to a third final and this time he won it.

Dos Santos and his players ignored speculation and then confirmation that the team was probably going to fold due to losses in the millions of dollars to battle its way into second place during the fall season, and then knocked off North Carolina FC, 1-0, to reach and host the NASL final at Kezar Stadium.

As coach of the Ottawa Fury, Dos Santos had lost to the Cosmos in the 2015 final, but a penalty kick in the 19th minute converted by Tommy Heinemann gave San Francisco the lead, and the Deltas’ rugged defense and some heroic stops by keeper Romauld Peiser held off the Cosmos until Kyle Bekker dummied a through ball that Devon Sandoval steered into the net in the final seconds.

Dos Santos reached the USL Cup final last year with Swope Park Rangers, which he left to build an expansion team that rode through turmoil on and off the field to win it all.

“It’s been quite an experience this year and we’ve had to overcome a lot of adversity,” said Sandoval, a former Real Salt Lake player who joined the NASL expansion team after receiving a phone from Dos Santos in January. “Marc is somebody who knows how to win and he understands the game very well. There’s a reason he’s been as successful as he has. It’s been fun, a good learning experience, and we ended the year with a trophy.”

The match looked dead-even based on head-to-head results between the teams. Since the Deltas lost, 1-0, to the Cosmos in late April, the teams had tied 0-0 and 2-2 at MCU Park, and the Deltas had prevailed, 2-1, at Kezar in early August.

A match between two well-prepared teams that know each other well was likely to be decided on a great play or a mistake, and in the 19th minute Cosmos keeper Jimmy Maurer lunged for a ricocheted ball and tripped Jackson. Referee Rubio Vazquez ignored fierce protests and signaled for a penalty kick that Heinemann slammed down the middle as Maurer lunged to his left.

The Cosmos forced a few anxious moments in the Deltas goalmouth, but the home team did press forward on occasion and finished with a 17-14 advantage in shots. Cosmos head coach Giovani Savarese said it took some time for his players to a surface slickened by recent rains that forced more long balls and direct attacks than he prefers.

“They did play their style; they are a tough team, especially when they score one goal they’re a little bit more difficult to play against,” said Savarese. “In the second half, I thought we did very well to open the spaces. We found spaces, we went at them. I think we created opportunities but unfortunately we couldn’t put those opportunities away.

“I thought our guys played a very good match starting from minute 10 in the first half. The beginning we were struggling because the field is not good. We were trying to play from the back but we had to play direct balls because the field didn’t allow us to play our way. I think my guys played a good game and it could have gone either way today.”

Faced with pending extinction, team management sharply reduced admission and concession prices for its final games of the season, and finally the local soccer community responded in droves.

A sellout crowd of 9,691 packed the downsized, former home of the San Francisco 49ers and rose to its feet in the final seconds. Once the final whistle went and league officials scurried onto the field to set up a stage for the medal and trophy presentations, fans started streaming onto the field from both sets of stands and by the time the Deltas assembled on the platform, they were surrounded on all sides by thousands of exuberant supporters, many of them decked out in the team colors of red, white, and black.

A chant of “One more year! One more year!” broke out as first a massive spray of champagne and then a blast of confetti rose into the night sky. But possibilities of the team’s return are remote -- the club has lost too much of an initial $10 million investment to continue unless new investors step forward.

For the Deltas, the NASL title game could be a final in more ways than one.