The USA’s first game since the 2018 World Cup qualifying failure, a 1-1 tie at Portugal, will be remembered for the exceptional debut performance by 19-year-old midfielder Weston McKennie and the blunder by 22-year-old goalkeeper Ethan Horvath.

USA Player Ratings:
Starters
Player (Club) GP/G
2 Ethan Horvath (Club Brugge/BEL) 2/0
With the USA enjoying a 1-0 lead, committed a ghastly gaffe by letting through his hands, arms and between his legs Vitorino Antunes’ shot from the wing. Five minutes later, he kicked the ball straight to Danilo Pereira and was lucky the Portuguese shot weakly. 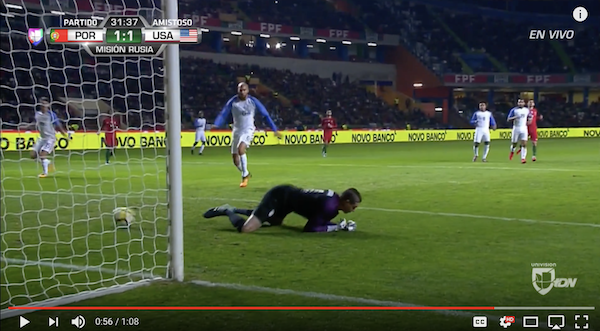 5 DeAndre Yedlin (Newcastle United/ENG) 49/0
Right back fared well defensively against the dynamic Bruma, made promising forwards runs, but his passes from the wing didn’t reach teammates.

6 Matt Miazga (Vitesse/NED) 4/1
Defended superbly in the middle and often helped out outside backs. Made a big blunder on the other end: a needless foul on Luis Neto, nullifying Brooks’ header into Portugal’s net off a 44th-minute corner kick.

5 Danny Williams (Huddersfield Town/ENG) 23/2
Defensive midfielder swept adeptly in front of backline. Sent in the cross for Adams’ chance. Shot horribly wide with no pressure on him in 81st minute. 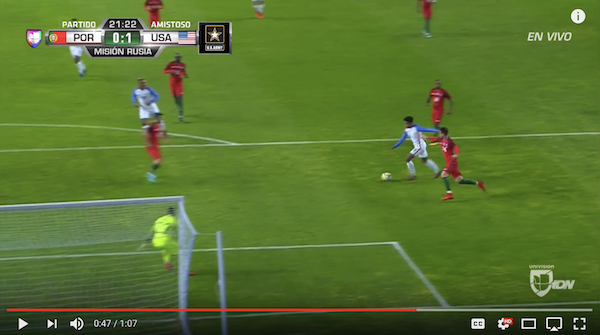 6 C.J. Sapong (Philadelphia Union) 3/0
His cross set up an Adams’ chance in the 20th minute and he assisted on McKennie’s goal. Portugal resorted four times to fouls to stop Sapong’s forays.

6 Cameron Carter-Vickers (Sheffield United/ENG) 1/0
The 19-year-old central defender made his debut with halftime entry for Brooks and did well against forwards Goncalo Paciencia and Tony Lopes as Portugal surged late in the game.

4 Jorge Villafaña (Santos Laguna/MEX) 15/0)
Subbed in for Lichaj at left back in the 59th minute. Failed to help much on offense. He did stop Nelson Semedo on a late Portugal attack.

6 Lynden Gooch (Sunderland/ENG) 2/0
The 21-year-old entered in the 59th and from left flank was one of more effective attackers late in the game. His cross set up a Carter-Vickers’ chance.

NR Dom Dwyer (Orlando City) 4/2
The energetic 77th-minute sub for Sapong was stopped twice by Portuguese fouls and didn’t see much more of the ball.