Why we over-coach, why we shouldn't, and how not to

While returning the player cards to a coach of the 9-year-olds I’d been reffing, I told him I noticed he had coached throughout the entire game, that he had not gone one minute without yelling something from the sidelines.

This was a friendly guy who didn’t get defensive about what he could have taken as criticism. So we talked for a while.

I explained that as ref, being in the middle of the field, I could hear all of his yelling, as well as the instructions that were screamed from the parents’ sideline.

He said he didn’t realize his sideline coaching had been non-stop and he hadn’t been aware of how much “coaching” was coming from the parents.

I think that’s one reason why there is so much over-coaching — they know not what they do. We have such an innate desire to see our children succeed that we don’t realize when we’re interfering with the learning process (not to mention disrupting their playtime).

We have an irresistible urge to help our children, whether they’re 6 or 16 or 26. That’s a good thing, but there are times when we need to refrain — such as when they’re playing soccer. That’s not just my opinion.

“Some of our players, you can tell they’ve been told their whole life exactly what to do in what situation, versus understanding the circumstances of the game and how to make certain decisions. … Something that all the best countries in the world focus on: Allowing their youth players to be decision-makers, and they’re able to do it without coaches and parents yelling constantly at them on the sidelines. I think that’s a massive cultural shift that has to happen, and I’m fully aware that’s extremely difficult to change. But I’m passionate about it and dedicated to helping.” 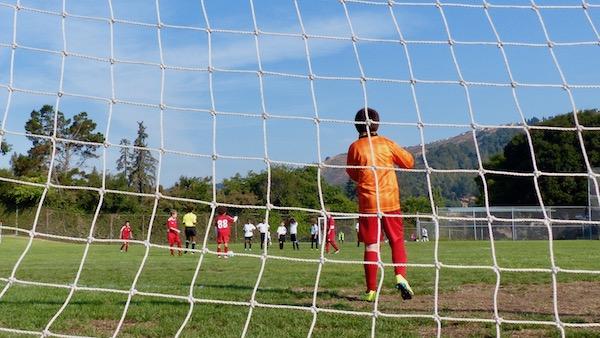 In September I interviewed the English FA’s Head of Development Team Coaching Matt Crocker, because the English have shown remarkable improvement in youth national team play. (England won the U-20 and U-17 World Cup this year.) Here’s what he said when I asked him what the biggest mistake coaches make at the youngest levels:

“Over-coaching. To act like that Premier League coach on the sidelines trying to solve all the tactical issues in games.”

Crocker added: “Give them opportunities to learn through the environment you create rather than correcting all the time.”

For sure, coaches should coach and give advice. 2016 United Soccer Coaches National Coach of the Year Ronnie Woodard, whose Tennessee SC’s U-18 girls were the first national champs from the state, says:

“I think that we’ve all been really guilty of getting caught up in the emotion of the game, but it’s really important that we ground ourselves and force ourselves away and have the ability to sort through the happenings of what’s going on on the field at that time, what your team needs to do better, and then how you can fix that at halftime and address the situation moving forward. Start teaching and stop yelling.”

Miriam Hickey is Director of the U.S. Soccer Girls Development Academy. Asked on how she judges youth coaches, she said: “I’m looking for coaches who inspire their players. Who let their players make decisions. Coaches who are giving information instead of, ‘Hey that was a good job’ or just telling them what they did wrong. I believe in short information and letting the game flow.”

Dave van den Bergh, whose pro career started at Ajax Amsterdam before playing in Spain and MLS, is the coach of the U.S U-15 boys national team. On what he hopes coaching is like for players at the youngest ages:

“I just hope that the coaches let these players be themselves. I hope that they’re not trying to over-coach them. I think especially at the youngest ages it’s imperative that these boys have fun and get touches on the ball and not be so caught up on having to win the game. They need to be allowed to discover what they’re good at. These boys need to have liberty. … I’m hoping the coaches let the kids fail nine times, because the 10th time they will succeed and that will boost their confidence so much they’ll keep on doing it. We have plenty of time at the older ages to instill some tactics.” 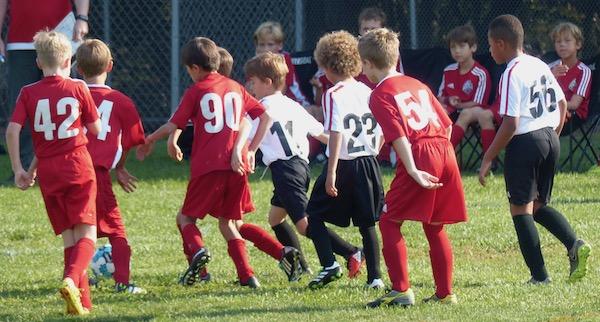 Jitka Klimkova, coach of the U.S U-20 women’s team, says: “It doesn’t work to scream at the players. Sometimes when I see that from coaches I’m embarrassed. Embarrassed for the coach and for how the parents can deal with this kind of coaching. That style is not so effective. That’s my opinion. … My big belief is to encourage them to do the right things and not just focusing on something they struggle with.”

Sideline-coaching may be especially prevalent in the American youth soccer because of the coach-centric nature of the USA’s historically popular sports.

“Looking at all the different sports in the USA, a lot of them are coach-driven,” said Nico Romeijn, U.S. Soccer Director of Coaching Education. “This has to do with the character of the sport. Teaching players patterns in these sports helps them to be successful.

“Soccer is a sport that can be characterized by unpredictable situations, because of the direct contact with the opponent and the fact that the ball is hard to control. The ball is played by the feet instead of the hands, the consequence is that there will be a lot of turnovers. This is the reason that the coach must prepare the players for these unpredictable situations by creating the learning environment to experience and make autonomous decisions.”

So how to refrain from the urge to interfere when the kids are playing?

• Would you walk into your children’s classroom and start telling them how to solve math problems? Would you yell at your kids at the playground or while they’re learning piano or trying to draw within the lines of a coloring book?

But the urge to yell at a sporting event seems almost natural. The popular method of alerting us to whether we’re cheering or instructing is a good one — if there’s a verb in it you’re over-stepping.

• Sit down during the game. You can buy a foldout chair for $15. I think most of us coaches have an urge to stand because of nervous energy. Or because that’s what we see pro coaches do on TV. But when sitting, you’re less likely to yell than when you’re prowling the sidelines. When you’re sitting, there’s no chance of players picking up on negative body language. (Players notice when their coach is nervous and that doesn’t help their confidence.)

Also, if you’re sitting most of the game, and there comes a time when the players really need to hear from you, you’ll have a much better chance of connecting when you do stand up.

• Instead of yelling when you see a mistake, take a note of it. Or mention it to your assistant coach. Address it not by yelling at a child who’s most likely already aware or even embarrassed by the blunder. But if you think you can help, there’s halftime or a future practice to convey advice.

youth, youth boys, youth girls
42 comments about "Why we over-coach, why we shouldn't, and how not to".
Read more comments >
Next story loading