Two games to go in the Eastern Conference playoffs, after which either Toronto FC will get a chance to atone for its stumble in last year’s title game or Columbus Crew SC can take its cause to the final hurdle.

Leg one of the conference finals is Tuesday (ESPN, ESPN Deportes, MLS Live, 8 p.m.) at Mapfre Stadium, one facet of Crew SC’s existence criticized by team owner Anthony Precourtas word emerged of his lust for Austin. As of late last week only standing-room tickets were available for what should be a frenzied, intense encounter between the remaining teams that can stage the MLS Cup final Dec. 9 and those that have also hosted the last two. 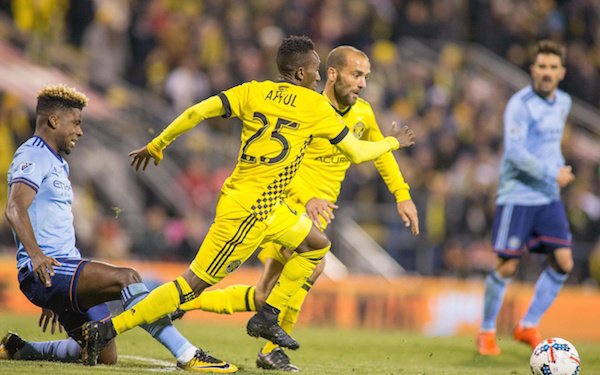 TFC earned that right last year, only to fizzle out offensively in a 2-0 loss to Seattle. It secured the top overall seed in 2017 by roaring through the regular season with a record-tying points total (69) and third-most goals scored (74), yet in the conference semifinals progressed only by away goals, 1-0, in a 2-2 series with the Red Bulls.

Crew SC at MAPFRE has been tough to beat (12-3-2). TFC inflicted one of those three losses by thrashing Columbus, 5-0, May 26, which was the third and last time these teams met in 2017. Columbus won its only game in the series, 2-1, at home way back on April 15, yet lost a subsequent home game by the same score less than a month later.

TFC is not preparing for this series based on what occurred six or more months ago. Crew SC rolled into the playoffs on a 10-game unbeaten streak and upset Atlanta United on penalty kicks (3-1 after a 0-0 tie) in the Knockout Round. Five days later in the conference semifinals it pummeled New York City, 4-1, at home and rode that cushion through a 2-0 loss in the second leg to prevail on aggregate, 4-3.

“They're a different team from what they were earlier this season,” says TFC defender Nick Hagglund. “We've watched them; we know what they're about: their idealistic way of playing soccer. We have a good idea of what they're going to do against us.”

Whatever TFC head coach Greg Vanney chooses to do in the first leg will be done without his two star attackers, Jozy Altidore and Sebastian Giovinco. Both are suspended, which weakens an attack that nonetheless can unleash Tiosant Ricketts, who came off the bench to bag both goals in TFC’s 2-1 win at Mapfre in May, as well as Victor Vazquez, scorer of his first MLS playoff goal against the Red Bulls.

Crew SC has its own demons to exorcise. It fell at Mapfre to Portland, 2-1, in the 2015 MLS Cup final and will just as determined as TFC to make up for a crushing disappointment. It has bounced back from a ninth-place finish last year and ignored the disdain of its owner thanks to the rebirth of playmaker Federico Higuain, who set a career mark of 14 assists during the regular season, and goals from four different players against NYCFC.

TFC’s defense poses a tougher problem than that of NYCFC and knowing that the second leg will bring back waves of attacks from Altidore and Giovinco, Crew SC must balance a need for goals with the danger of conceding at home. During the regular season, Ola Kamara and Justin Meram scored a combined 31 goals and along with Higuain give Crew SC an attacking trio as good as any among the MLS final four.

“Toronto’s tough; they have a good defense and they’re tough to break down,” said head coach Gregg Berhalter to reporters on Thursday. “It’s numbers and it’s space. They do a very good job of condensing space centrally. They get a lot of numbers behind the ball. They play a wide back five that covers a lot of ground across the penalty box. So it becomes challenging.”