Atlanta United's Bocanegra: 'We want to challenge for championships now'

Atlanta United had MLS's second-best offense and third-best defense in its first season, but technical director Carlos Bocanegra says the Five Stripes are not about to blow up their squad after their quick exit in the playoffs.

"We set high aspirations for ourselves and were able to accomplish getting into the playoffs," he said at season-ending press conference. "We were able to get our team to gel and get the team to come along quickly. We fell a little short as far as we wanted a deeper playoff run. But we don't want that to tarnish what a great season it was for us."

Atlanta United fell to Crew SC on penalty kicks after their game ended in a 0-0 tie before an MLS playoff record 67,221 fans at Mercedes-Benz Stadium.

Bocanegra said the grind of regular-season games in September and October following the opening of Mercedes-Benz Stadium took a physical and mental toll on Atlanta United's players and losing on penalty kicks was not a way anyone wanted to go out.

Atlanta United will have a lot of work in the offseason:

1. Decide whether to keep or sell MLS Newcomer of the Year Miguel Almiron, rumored to be targeted by some major European clubs.
2. Decide about the future of loan players Yamil Asad (Velez Sarsfield), Greg Garza (Tijuana) and Anton Walkes (Tottenham) and MLS free-agent signing Jeff Larentowicz.
3. Add a few players to build depth in the squad, the one area Bocanegra says the club needs to strengthen, citing Supporters' Shield champion Toronto FC for what it has accomplished in building its squad.
4. Find pathways for U.S. U-17s Andrew Carleton and Chris Goslin, who will be in their second full seasons in Atlanta, and first-year Homegrown Players George Bello, Lagos Kunga and Patrick Okonkwo.
5. Build out its new USL team with a coaching staff and players. 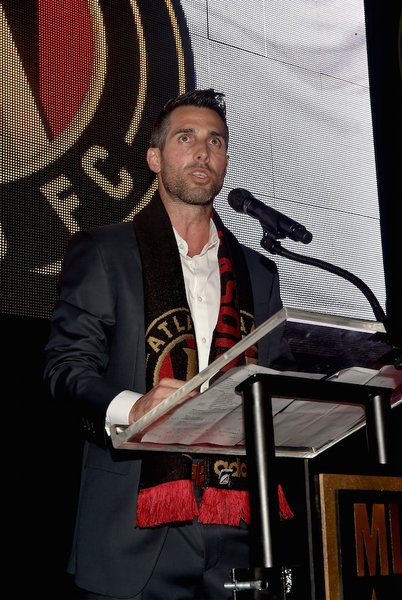 "We would like to strengthen in a few spots," Bocanegra added, "but we want to challenge for championships now. That's why we're here. We have fantastic infrastructure. [Owner] Arthur [Blank] has given us awesome resources with the training facilities like this and the stadium. The guys and ourselves are provided with every chance to be successful. Now going forward is about going as far as we can and bringing championships back to this city."