Save the Crew? Stadium proposal will at least spark discussion

On the eve of the Columbus-Toronto FC playoff game, Columbus Foundation president and CEO Doug Kridler  has laid out his plan for a downtown soccer stadium. 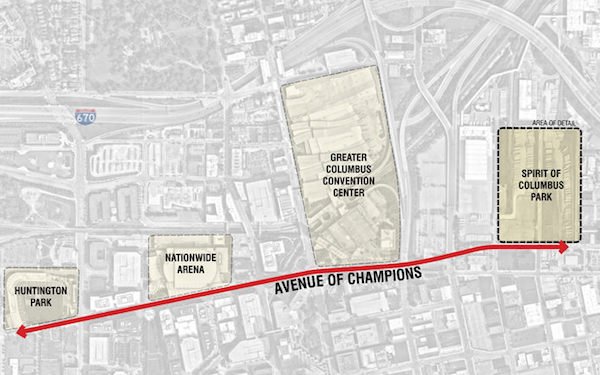 Kridler, who has been one of the point persons working on keeping Crew SC in Columbus, termed the plan "a creative exercise" and, sure enough, it immediately ran into opposition, but it has served its purpose and created discussion about what it might take to keep the Crew in Columbus.

Spirit of Columbus Park, as he calls it, would include a 21,000-seat soccer stadium, parking garage and a 350-seat children’s theater and join other sports facilities in downtown Columbus.

As Kridler writes in his disclaimer, the 14-page proposal is "a creative exercise that has not been vetted with or approved by any of the parties mentioned in this document," namely the city of Columbus and Franklin County, which would need to help fund the project, and Precourt Sports Ventures, which owns Crew SC and has considered moving the team to Austin.

Indeed, a central point to the stadium plan -- using one-half of the quarter-cent county sales tax set to expire on Jan. 1, 2019, for a period of three years to help fund the stadium to the tune of $90 million -- was immediately panned, the Columbus Dispatch reported, by Franklin County commissioner John O’Grady.

Kridler also proposes funding help from the city of Columbus (the cost of construction of the parking garage and infrastructure), state of Ohio ($5 million for the Columbus Children’s Theater) and Columbus business community (boosting annual season-ticket sales by 4,000).

Precourt Sports Ventures would be on the hook to pay for the rest of the cost of building the stadium, but the (ambitious) goal is to create such a package of financial incentives that it can't say no.

In a statement he released, Kridler admitted he barely knows Anthony Precourt, the Precourt Sports Ventures CEO, and he "wouldn’t give him or the MLS any style points for how the past month’s communications have been handled. However, I do respect the fact that he owns this team, plain and simple, and I believe our best chance to save the Columbus Crew, its youth programs and other benefits it brings to Columbus now and could in the future as the sport continues to grow, is to generate ideas to try to work out a solution that works for this or a successor owner, and for Columbus."