When New Yorker Tom Byer, who has spent more than 20 years of running youth soccer programs in Japan, was appointed the Head Technical Advisor by the Chinese Football Association in 2012, The South China Morning Post announced that the man who is regarded as a “superhero” in Japan is leading the “Chinese soccer revolution.”

HBO, which is featuring Byer in an edition of “Real Sports with Bryant Gumbel” titled Soccer Sensei, calls him a “soccer guru” with a “plan to rescue American men’s soccer.” Byer has recently been charged with launching a U.S. Soccer-supported “Soccer Starts at Home” program in Seattle. Byer asserts that the under-6 age group has been the most misunderstand part of soccer. 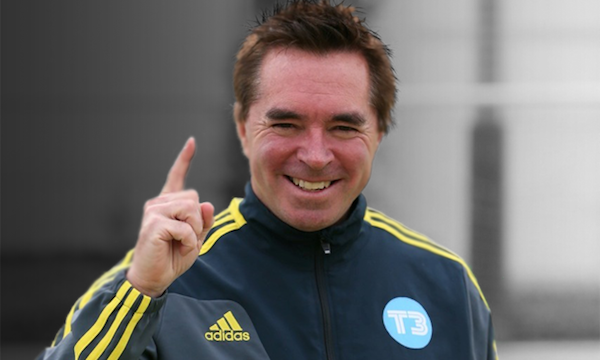 SOCCER AMERICA: We have had in the USA, for more than a decade as far as I know, companies offering soccer classes for children from 18 months old and up. How is what you’re advocating different?

TOM BYER: There’s a stark contrast, and this is what it is: Development for 3-, 4-, 5-year-olds will almost never happen in a collective environment.

My kids played in one of these little kicker things for three years [at a Japanese kindergarten that outsourced to recreational companies]. I can tell you this much: They learned absolutely nothing.

What are these little kickers programs good for? They’re good for social development, they’re good for learning to play with other children. They’re good for giving mom or dad extra time. It gives the kids first exposure to the game, but I know for a fact, unequivocally, if I as a father or parent, hadn’t taken the responsibility into my own hands to teach my kids to basically master ball skills, they would have never learned them in a collective atmosphere.

For your children, you put small soccer balls in rooms throughout your house …

Small foot, small ball. I started in the house with the little balls for my little guy who had just started walking.

And I discouraged him from kicking – if he kicked he's going to run inside the house and probably fall over and maybe even get injured -- but I encouraged him to protect the ball and pull it back and keep the ball close to him.

But it wasn't until I starting really putting the development phase under the microscope that I started connecting a lot of dots and started really absorbing and understanding how player development took place. 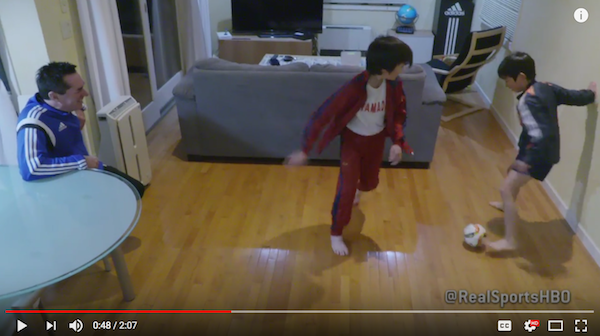 The role of the parents is so important in the development of a young player. That’s why it’s important to have a much more intelligent, knowledgeable, engaging parent of a child and I maintain that this is the game-changer.

That’s happening in a lot the other countries where the culture is very conducive to teaching and developing children because soccer is so deep in the culture that parents have a much better understanding of what to teach the kids instead of constantly kicking the ball.

Yes, when you study their stories you’ll find out their soccer started at home. ... Where are more Landon Donovans, Christian Pulisics and Clint Dempseys?

Christian Pulisic’s parents had a massive influence on him. Clint Dempsey started playing inside his house. I read an interview in which Landon Donovan’s mother was asked when she bought him his first soccer ball. Her answer was I didn’t have to, we already had balls scattered all around the house and he played with his siblings.

When it comes to parents playing soccer with their children, you seem to discourage them from passing the ball with them. I’m sure I can find plenty of great players who passed around with their parents. Are really saying parents shouldn’t pass the ball back and forth with their kids?

I’m not saying that at all. What I’m saying is that you can do that along with other things. It depends on what the age is. But to me, to start passing the ball back and forth to a ÷2-, 3- or 4-year-old seems to be counterproductive. You’re teaching the child from a very young age to get rid of the ball.

Now, this the part I think everybody is mystified with because the reality is the game is a passing game. It is. So there’s a bit of contradiction. What I’m saying is, you look at best players, the best passers, the players who understand combination play, etc., they mastered the technical skills at a very young age.

You can teach an older child to pass, but if a child hasn’t mastered dribbling, that’s very difficult to learn later …

The sport is such a technical sport that it takes a ridiculous amount of time practicing to become good. So what I’m saying is that when you get a kid from a very young age to grow up learning to possess the ball, pull the ball back with right foot, left foot … learning to stop and start ... Do all these things core skills, you’re essentially building the building blocks of the game.

We’ve become so fixated on methodology of how we coach. We look all over the world at national curricula … Everybody is trying to invent the wheel, where for me it always comes down to the same core belief: the technical component is the foundation upon which all the rest of the game on depends on. The truth is that technical skills are rarely the result of coaches. 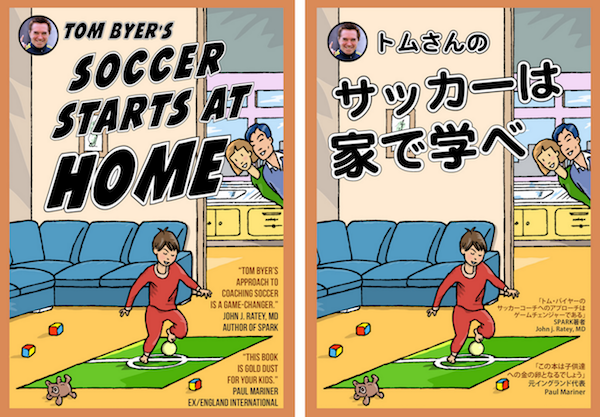 You talk about parents demonstrating skills, and about the soccer ball turning into a child’s “best friend.” But there’s a passage in your book: “The child must learn to control the ball and move the ball and stop the ball at will. With both feet.” Is there a danger that parents could become overbearing, trying to coach their kids too much to learn difficult skills?

I try to draw a big distinction between coaching and teaching.

Separate the idea of a parent teaching something rather than coaching. I don’t like to use the word coaching for parents because I believe we teach our kids and so we can prepare them so that when the coach receives our kids he or she can start coaching. It’s a collective environment.

I’m throwing a lot of things out there and I’m putting out my life experience. I don’t believe there’s one size fits all. Everybody knows kids develop at a different pace, different speed, different maturity.

But what I know is, what I did with my two boys anybody could do. It’s not like you’re out there with the bullwhip forcing your kids to play. But the whole idea is if you’ve got a lot of balls around there’s a good likelihood that if you can model what it is you want the kids to do, which is the basics of pulling the ball back with the right foot and the left foot and just gliding the ball along the floor and just basically stopping and starting -- and encouraging the sole the foot -- you’ll find that kids become more engaged. Also it’s very important -- the relationship between child and parent. Children enjoy showing their parents something they’ve learned to do.

Is your approach mainly designed for countries that don’t have a rich culture?

I’ve got about 70 or 80 slides in my PowerPoint. It’s very interesting, interactive, lots of videos, it documents the development of my kids since they could start walking until now, fast forward, they’re now 9 and 11 years old. I’ve taken that presentation around the world and I’ve basically tried to expose myself to as much criticism as I possibly could.

And some of the highlights being, being invited to Manchester United and presenting to Ryan Giggs, who in turn asks me to present to Gary Neville the next day. Or Rio Ferdinand who flew all the way to China. He wanted to see the presentation. Or last year, Dec. 7, in Geneva I was asked to present to nearly 50 technical directors from UEFA. Or the owner of AS Napoli, Aurelio De Laurentiis, who invited me into his home in Rome because he wanted to see the presentation.

The reason I say this, is not because I’m looking for a pat on the back, but I’m trying to convey to the world that I’ve put this in front of the so-called experts. Recently I was invited to Ajax. I have friends there and they asked me to present to the Ajax academy director and he was so impressed with the presentation he asked me to go over to the Dutch federation and I spent a couple hours over there with one of the top guys from the coaches education department. So, when I see the reaction from people in the soccer world who are at the top of the games, the movers and shakers of football worldwide, and what I’m finding is this under-6 age group has been the most misunderstand part of soccer.

You seem to disparage juggling, a popular way for kids to play on their own. A way to work on touch, improve the weaker foot for example ... balance. And while I concede that juggling doesn’t make one a great player, every great player I’ve come across is a good juggler ...

When I was growing up, I could juggle 10,000 times. My biggest idol was Tommy Mulroy, the juggling genius. But if I did it over again, I would spend a lot more time mastering the ball with it on the ground.

I believe juggling is useful because it’s a fun thing for kids to do on their own, and it’s about timing. Anything to get the kids active with ball is good.

But one issue is that it’s ridiculously difficult for young children to become good at it. Whereas it’s much easier for them to master skills with the ball on the ground. For the littler kids, the other core skills are more important than juggling.

My kid’s an excellent juggler, but that could be because he got good at the other skills first.

I wouldn’t put a massive emphasis on juggling but I wouldn’t debunk it.

The HBO special touts your “plan to rescue American men’s soccer.” And U.S. Soccer has announced your “Soccer Starts at Home” is part of its Grow Fund initiative. Tell us about that.

Here’s what’s happening, and this is a big misunderstanding. People think I’ve been brought in because I’m this big tsar, that I have these magically powers and have these endless resources.

I’m in a pilot program with U.S. Soccer to put a program in place in Seattle. Only Seattle. We’ve got three stake-holders. U.S. Soccer. MLS. And the youth component. What I’m trying to do is position ourselves as the glue, the stickiness that we can bring these three groups together to agree on one thing: That soccer can start at home and that the parents play a critical role.